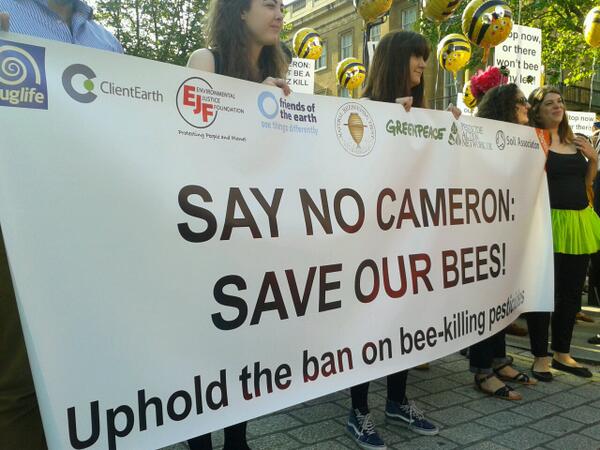 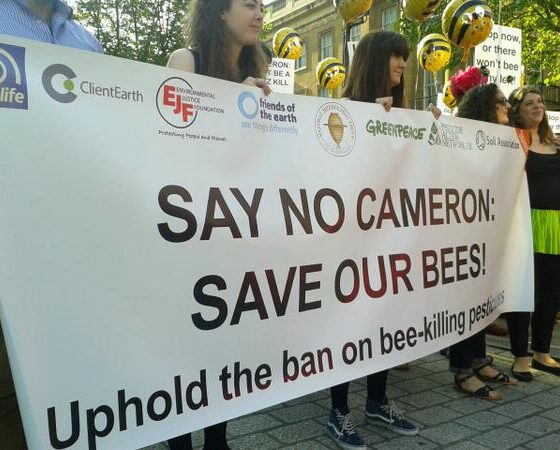 A coalition of campaigners have urged prime minister David Cameron to uphold a ban on bee-killing pesticides, as his cabinet decides whether to grant an emergency exemption for one of the controversial chemicals.

On Tuesday, the government is expected to rule on an appeal from the pesticide manufacturer Syngenta regarding neonicotinoids – a class of pesticides banned across the European Union for two years from December 2013 despite opposition from the UK.

Though they are prohibited for their impact on essential pollinator species, including shrinking bee populations, the UK can allow the use of neonicotinoids in “emergency circumstances.”

However, campaigners have written a joint letter to Cameron urging him to resist Syngenta’s lobbying, with protesters dressed as giant bees gathering outside Downing Street.

The letter, submitted by the Bee Coalition, a group of organisations including Friends of the Earth, Buglife and the Environmental Justice Foundation, says there would be “no justification” for lifting the ban.

“Any such derogation […] will undermine the temporary ban on the use of neonicotinoids imposed by the EU at the end of last year, making it even more difficult to assess the true impact of neonicotinoids on pollinators,” it argues.

A petition calling on Cameron to “put our bees above Syngenta’s profits”, launched through the protest platform 38 Degrees, has also gathered 22,0000 signatures.

Friends of the Earth nature campaigner Paul de Zylva added, “These chemicals have been banned because there is clear scientific evidence linking them to damaging the health of bees.

“Ministers should be helping to get farmers off the chemical treadmill so they can protect their crops without relying on bee-harming chemicals. David Cameron now has a clear choice: will he back scientific evidence and the well-being of Britain’s bees – or the interests of the pesticide industry?”

Tuesday’s verdict will come just days after scientists warned the evidence that the pesticides are harming bees and affecting global food systems is “very clear”. This caution followed a separate study from Harvard University, which came to the same conclusions.