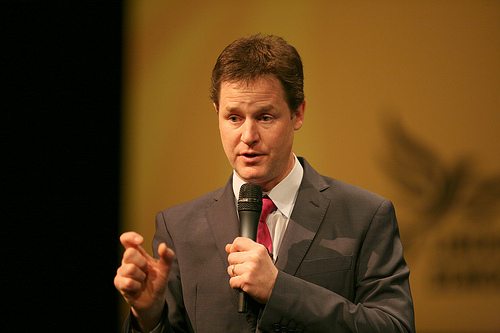 Liberal Democrat activists have voted unanimously in favour of a policy motion on climate change, approving measures to improve Britain’s flood defences and require companies to disclose their environmental risks.

At the party’s annual conference in Glasgow on Monday, activists set the Liberal Democrat’s policy on climate change.

The motion, which passed without dissent, calls on the government to ensure flood defence spending keeps pace with the increasing impacts of climate change.

Similar measures would also introduce regulations that would set higher standards for buildings in threatened locations and help landowners in adapting to flood risks. This comes after the wettest British winter for a hundred years caused devastation across the UK.

“The widespread flooding of last winter shows how urgently we need to prepare for the side effects of climate change. We can expect more extreme weather events in the future and without sufficient planning we will suffer untold damage to our lives, communities and economy,” said Lib Dem DEFRA minister Dan Rogerson.

“The proposals, which have been put forward, and supported, by our party members, will further protect this country from what is undoubtedly the biggest long term threat to this nation in modern times.”

The motion would also extend existing rules, which require firms to report on their greenhouse gas emissions, to force large companies to disclose how they plan to adapt to climate change.

“The simple fact is too many of our large corporations today are overstating their future earnings potentially because they are failing to prepare for climate change. And that will hit your and my pensions,” said Mike Tuffrey, a former member of the London assembly, during the debate.

After the vote, climate change secretary Ed Davey said his party had long taken the lead on climate action, praising advancements in renewable energy under the Coalition government. His party, he said, is “doing everything [it] can to halt the onset of a changing climate”.

Davey went on to claim that his party’s efforts in government had helped the UK become one of the most attractive countries for renewable energy investment.

While the Liberal Democrats have often been praised by environmentalists for taking a more pro-active, united approach to climate issues than the other main parties, their achievements in the Coalition have been scrutinised. Under Davey’s watch, the UK has recently slipped down renewable investment attractiveness tables.

The party did advance its green credentials in September with a package of ‘green laws’ that, if well received by the public, will feature in its 2015 general election manifesto.

The proposed rules would put in place legal targets for clean air and access to green spaces and establishing new marine and coastal reserves.

Explaining the Lib Dems’ moral position on the environment, deputy prime minister and party leader Nick Clegg added, “We do not have a right as this generation to rob future generations of clean air, good drinking water and the kind of sustainable environment to which they are entitled.”