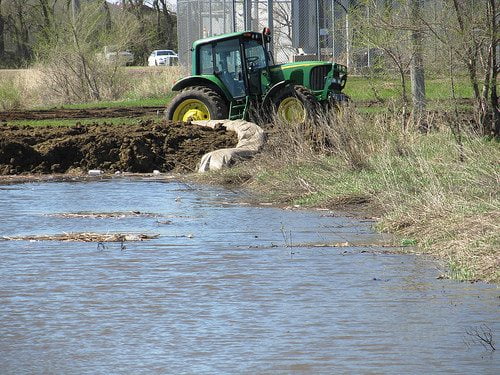 The president of the National Farmers’ Union (NFU) has condemned proposals to flood land on high ground to prevent homes and businesses in towns and cities from being hit.

The plans are part of efforts to mitigate the effects of further heavy rainfall, after storms and flooding caused more than £1 billion of damage to the UK in recent weeks.

The leader of Plymouth city council in the south-west of England – an area hit the hardest – told MPs this week that the floods had had a “devastating effect” on the local economy.

The flood prevention plans opposed by the NFU include creating bogs and ponds on higher ground, which engineers believe will prevent water from rushing down hills and causing flooding. NFU president Peter Kendall said such measures were “ludicrous”.

Speaking at the organisation’s annual conference, which began on Tuesday, Kendall said, “We have to put lives and human safety first but we have to put a higher priority on agricultural land.”

He told the BBC’s Today programme on Tuesday that the UK should follow the lead of countries such as the Netherlands, where waterways are maintained and dredged regularly, allowing water to quickly flow into the sea.

But some experts have said that farmers are partly to blame for the level of flooding witnessed, claiming that they have drained bogs and ponds that used to catch rainfall.

The government is due to launch a £10m fund on Friday to help out farmers that have had their livelihoods destroyed. David Cameron said that money was “no object” in the clean-up operation, and the fund will mean that farmers are entitled to claim up to £5,000 in emergency funding.

However, Ed Miliband recently said that the prime minister was creating a “false economy” with his flood defence efforts.

“The really interesting thing about Cameron’s infamous money is no object – I think that’s a surprising thing for him to have said – is that he was saying it about the clean-up, but he wasn’t saying it about investment in flood defences […] that is a totally false economy”, the Labour leader said.

Miliband said the recent floods should be a “wakeup call” to climate change and that it was a “national security issue”, adding that there was a “real make or break issue about the kind of climate we pass on to the next generation and the generation after that”.