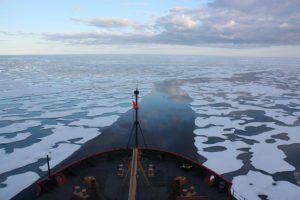 The MV Crystal Serenity is due to set sail on 16th August from Seward, Alaska to New York on a 32 day, 1,500 km journey through the legendary North West Passage via Canada and Greenland. With over 1000 passengers, 650 crew, a casino, 6 restaurants, & a cinema, she is easily the largest luxury cruise ship to sail these remote, icy waters. The UK’s ice-strengthened polar logistics and science vessel RRS Ernest Shackleton will accompany the Crystal Serenity, for safety backup.

“This voyage symbolises the risk of large scale cruise ships operating in the Arctic. The unique wildlife is already stressed by a warming climate and the loss of sea-ice, and the arrival of mega-cruise ships in this part of the world could push it further towards the edge.

It’s because the Arctic is in meltdown that this cruise can take place.

“This year we saw the sea-ice crash to a record low for June as it continued its downwards spiral. The loss of sea-ice is bad news for Arctic species like polar bears, walrus and narwhal, and for Arctic people.”

WWF believes that the risk of an accident in these poorly charted, ice-infested waters is high. There is no effective technology to clean up oil spills in ice, and little infrastructure in place to deal with a major incident.

“Arctic communities need good sustainable sources of revenue, and tourism is likely to be part of that future. We recognise the positive steps that Crystal Cruises have taken to minimise their impact, working with local communities and in particular choosing not to burn Heavy Fuel Oil in the Arctic, which is more persistent and damaging to wildlife if spilled. But if tourism is not sustainable, we risk ruining the very thing that tourists would come to see.”