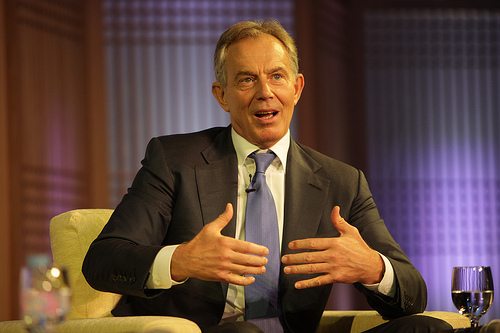 Former British prime minister Tony Blair has said the time for debating whether humanity is causing climate change is over.

Speaking at a major climate conference in New York on Monday, as the Intergovernmental Panel on Climate Change (IPCC) presented a final draft of its comprehensive review of climate science to world leaders in Stockholm, Blair said, “After this panel assessment this week, there will no longer be any serious doubt in the minds of serious people that this is a serious problem.

“The question is can we find the means of galvanising the [political] leaderships to act in the way they should?”

The Intergovernmental Panel on Climate Change (IPCC) Working Group 1 report will be published on Friday. It will demonstrate the growing certainty in the scientific community that climate change is being driven by human activities such as deforestation and the burning of fossil fuels.

Every five years, the IPCC publishes a comprehensive review of the research on climate change. This will be its fifth series of reports, and leaked drafts have revealed a number of its alleged key points.

The drafts stated that scientists are 95% certain that the “human influence on climate caused more than half the observed increase in global average surface temperatures from 1951-2010.”

“Ninety-five per cent certain, is a pretty large degree of certainty – I recall that the number of people who think Elvis is still alive is round about 5%”, Blair added.

Since his resignation as prime minister in 2007, Blair has been involved in many environmental causes. He has supported the Climate Group, a non-profit foundation that teams up with big business to tackle climate change issues, and has worked for Zurich Financial Services as an adviser on climate change.

Also speaking at the weeklong conference in New York, president of the World Bank Jim Yong Kim said that climate change sceptics “have a problem with science.”

He added, “We have to stop with these silly arguments and move forward on thinking about what we are going to do.”