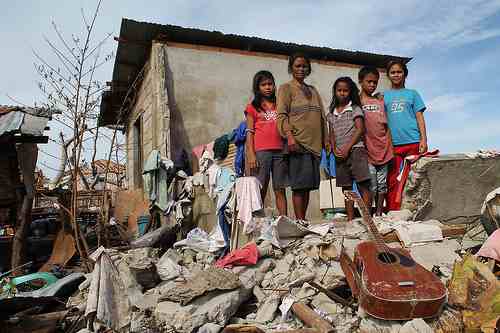 The Philippines’ finance minister Cesar Purisma has said that Typhoon Haiyan will have a negative effect on the country’s economy, which had been expected to grow by 6% in 2014.

Speaking to the BBC, Purisma said that the worst affected region accounted for 12.5% of the national economy and that overall, the damage might mean that the Philippines will grow 1% less than initially thought because of the effects of the disaster.

He went on to say that it would take years to rebuild infrastructures, which will be the focus of the government, in order to protect the population from future extreme weather events.

“We are investing increasingly in infrastructure – it will be 20% of next year’s budget.”

Typhoon Haiyan, which made landfall on the Philippines’ coasts on Friday, is one of the strongest storms ever observed so far and caused more than 2,000 deaths, with many people still missing.

During the UN climate talks taking place in Warsaw, Filipino delegates said their country could not manage the consequences of climate change on its own.

Naderev Saño, the Philippines’ climate change commissioner, is currently on a hunger strike at the negotiations in Poland. He said he was doing so in solidarity to its people who were struggling to find food and was determined to keep going until a meaningful deal was reached over climate action.

While cyclones are not directly caused by climate change, rising sea levels linked to global warming make some countries more vulnerable than others.

Other studies also suggested that when cyclones destroy forests and ecosystems, this causes more carbon to be released in the atmosphere – which speeds up global warming.