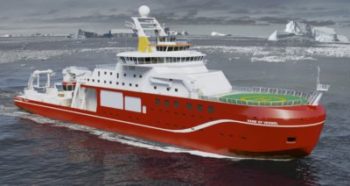 The name of the UK’s new polar research ship has been announced. Whilst “Boaty McBoatface” attracted a huge interest with the British public, the ship has been named RRS Sir David Attenborough, in honour of the world-renowned naturalist and broadcaster.

One of the ship’s remotely operated sub-sea vehicles will be named “Boaty” in acknowledgement of “Boaty McBoatface” which came top of a poll asking the public to vote on what the ship should be called.

The RRS Sir David Attenborough is being built on Merseyside and is due to set sail in 2019. The ship will be the most advanced polar research ship in the world and will be investigating the oceans in a multitude of ways and probing how best to address climate change.

The state-of-the-art ship will also enable scientists and technicians to stay at sea for longer and study the polar environments during the winter months.

The sub-sea vehicle, Boaty, will be dispatched from RRS Sir David Attenborough to allow the ship’s research crew to collect data and samples from the deepest waters of the Arctic and Antarctic.