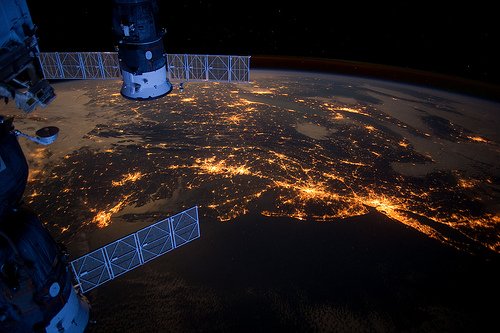 The consumption of resources at an uneven and ever-increasing rate is putting undue pressure on the Earth, its inhabitants and its biodiversity, according to the WWF’s biennial investigation into the health of the planet.

The latest Living Planet Report, produced in collaboration with the Zoological Society of London and Global Footprint Network, was launched earlier this week.

European Space Agency astronaut, André Kuipers, was on hand to kick off the investigation, direct from his post at the International Space Station.

“We only have one Earth”, the Dutch physician said.

“From up here I can see humanity’s footprint, including forest fires, air pollution and erosion – challenges which are reflected in this edition of the Living Planet Report.

“While there are unsustainable pressures on the planet, we have the ability to save our home, not only for our benefit, but, above all, for generations to come.”

Kuipers’ thoughts, and indeed the theme of WWF’s report, both echo the words of Jules Pretty, professor of environment and society at the University of Essex and member of the Royal Society, who told Blue & Green Tomorrow earlier this month that a significant rise in both population and consumption would spell “real trouble” for the planet.

The Living Planet Report uses the Living Planet Index—a collection of data from over 9,000 different wildlife monitoring schemes—which displays a 28% decline since 1970.

“We are living as if we have an extra planet at our disposal”, said Jim Leape, director general of WWF International.

“We are using 50% more resources than the Earth can sustainably produce and unless we change course, that number will grow fast—by 2030 even two planets will not be enough.”

And it’s the developed nations that are doing most harm. For example, if everyone in the world lived as North Americans do—consumption-wise—we’d need five planets of resources to support the population.

Even developing economies such as India are exhibiting something called ecological overshoot.

But all is not lost.

“Solutions lie in such areas as reducing waste, smarter water management and using renewable sources of energy that are clean and abundant—such as wind and sunlight”, Leape added.

And the best way to fuel this sustainable change is through investment. Our recent Guide to Sustainable Investment outlines the many ways in which your money can help ease the pressure on the Earth’s ever-bulging ecological credit card.