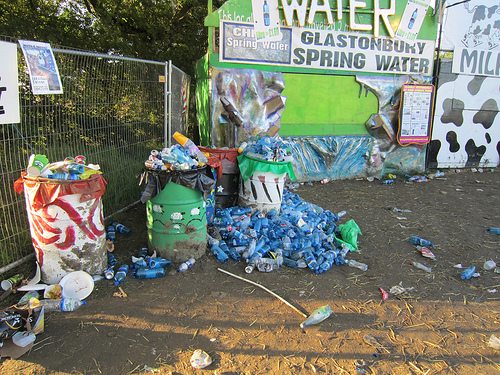 Organisers of Glastonbury festival have unveiled plans to encourage the public to use reusable bottles instead of disposable ones, to reduce the amount of rubbish left after the event.

Stainless-steel reusable bottles to be filled at various water taps will be given to crew members and will be on sale at the festival, in an effort to raise awareness among festivalgoers about the environmental impact of plastic.

The organisers say plastic bottles are the most common item of litter left once the event is over. A recent survey also found out that 60% of festivalgoers leave their tents behind as well.

Glastonbury’s organisers estimate that around 1m disposable bottles are left by the public each year and they are planning to solve the issue entirely for next year.

Glastonbury 2015 will replace all plastic pint pots and cutlery with reusable items, in order to take another step towards its ambition of becoming the world’s greenest festival.

Lucy Smith, Glastonbury’s green issues organiser, said, “We have amazing water quality in the UK but everyone is obsessed with drinking bottled water.

“We want to be as sustainable as we can. We do everything we can, but coping with the litter of 140,000 people is a challenge. We can’t put bins everywhere.”

Glastonbury festival in Somerset will run from June 25-29 and has so far had a strong focus on sustainability, with founder and owner of the site Michael Eavis encouraging people to travel to the festival by train or bus.

The Eavis family also announced that the site where the festival takes place will remain free from fracking activities.