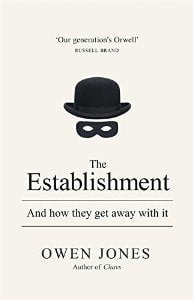 Book review: The Establishment: And how they get away with it – Owen Jones (2014)

International bestselling author Owen Jones takes a looks at the British Establishment and calls for democracy. Jones looks at our current democratic system and those behind it that are not held accountable yet have huge amounts of power.

The Establishment looks at a wide variety of individuals and organisations from the lobbies of Westminster, to newsrooms, boardrooms and the trading rooms of Fleet Street and the City. The author demonstrates how all of these organisations are interconnected and have vested interests, and as a result, are not acting in the interest of the public and posing a threat to democracy.

Jones is a regular columnist for the Guardian and writes, “Socialism lives in Britain, but only for the rich: the rules of capitalism are for the rest of us. The ideology of the modern establishment, of course, abhors the state. The state is framed as an obstacle to innovation, a destroyer of initiative, a block that needs to be chipped away to allow free enterprise to flourish.”

He notes that when the financial system crashed in 2008, it was not expected to stand on its own but instead become Britain most “lavished benefit claimant” and that when bonus limits for bankers were unveiled luckily for City workers “their friends in high office were they’re to rescue their bonuses”.

Contrasting this with the fate of the unemployed, including those that have lost their jobs as a result of the financial crisis, who have faced austerity measures and cuts to support, Jones highlights his point.

“The entire British government demonstrated, not for the first time, that it was one giant lobbying operation for the City of London,” Jones adds.

The Establishment is interesting, riveting, easy to read and an excellent follow-up to Jones’ bestselling Chavs: The Demonization of the Working Class.