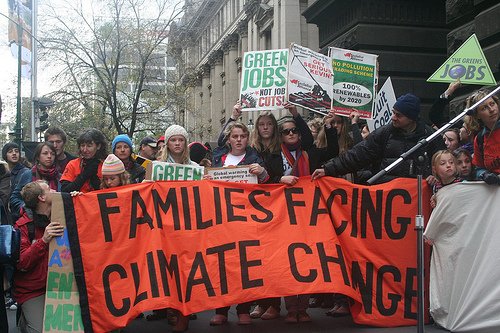 Changing your mind about climate

If you are an avid user of Twitter or a reader of Blue & Green Tomorrow down under, you may have heard about an Australian TV show that this week caused somewhat of a stir amongst the environmental movement.

The show in question, called I Can Change Your Mind About… Climate, was shown on ABC on Thursday evening (Aussie time), and pitted retired Australian politician Nick Minchin—a self-described climate change sceptic —against staunch environmentalist Anna Rose who is co-founder of the Australian Youth Climate Coalition.

The pair, who obviously possess radically contrasting views on climate change, travelled around the world interviewing a number of individuals from each side, with the ultimate aim of changing each other’s minds.

The fallout of the documentary has been quite interesting to say the least.

John Cook, founder of Skeptical Science, blogged on the subject for The Conversation in a piece entitled “No one likes to change their mind, not even on climate”.

“We know from both research and experience that people cling to information that is in line with their beliefs and worldviews, even when they suspect or even know the information to be false”, Cook wrote.

“In other words, people will defend their beliefs.”

The Guardian published a piece claiming that scientists had accused the show of “giving [a] voice to climate sceptics”, which was in turn “skewing evidence”.

The normally discreet and impartial James Delingpole wrote a piece for The Telegraph that honed in on ABC itself, saying that it was “even worse than the BBC”— whatever that’s supposed to mean.

Anna Rose, who eloquently displayed a flawless case for human involvement in climate change throughout the documentary, really hit the nail on the head with one particular quote.

Speaking to the prominent Australian climate sceptic blogger Jo Nova and her partner David Evans, she said something along the lines of, “Even if you don’t accept anthropogenic global warming, surely you must accept that we need to change our habits in order to build a sustainable future.”

And that’s the key point. It’s imperative that climate change believers and climate change sceptics alike come together for a sustainable future. One way you can affect change is by aligning your investment portfolio with your morals.

Have a look at our Guide to Sustainable Investment, which is a one stop shop for ethical, sustainable and responsible investment.

In the meantime, KQED has a climate change survey on its website. It would be interesting to see what Blue & Green Tomorrow’s readers think on the subject (though we can probably take an educated guess).

To take the survey, click here, and don’t forget to let us know your results by commenting on this page.