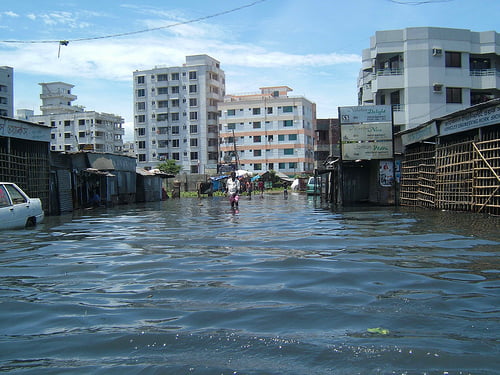 After global climate negotiations in Doha wrapped up at the weekend, Steve Trent, executive director of the Environmental Justice Foundation (EFJ), writes about how climate change affects human rights and why the talks in Qatar didn’t go far enough.

As an international community, our collective failures on climate change are having critical consequences. Today, climate change has become one of the major challenges to the basic human rights to life, food, health, water, housing and self-determination.

Philosopher Simone Weil said that, “To be rooted is perhaps the most important and least recognised need of the human soul”. Take a moment to consider your roots and the place you call home. I suspect that, like me, your home represents a lot more to you than just the bricks and mortar of your house. Rather the place we identify as home probably has more to do with culture and background, friends and family, livelihood and daily habits and the landscape in which each of us live.

Whether from London or Beijing, rural Bangladesh or one of the many small Island states like Fiji, your sense of identity is fundamentally tied to all these things. In most cultures this connection is palpable. There is a beautiful example in the Fijian language – the word Vanua. This is often (mis)translated into English as ‘land’, but its real meaning is, ‘land, people and custom’. It relates to intimate connection between the landscape, culture and sense of identity.

What does it mean then to be deprived of your roots and home? Losing the security of the place where you sleep can be devastating. Being forced from the place we call home – the place you were born, where your family, friends, habits and culture reside by circumstances over which you have no control and had no part in creating.

EJF’s report, A Nation under Threat, released yesterday, reveals that it is exactly this kind of forced migration that is now emerging on a massive global scale, with millions mainly among our planet’s poorest and most vulnerable being forced to move. These are the new refugees; ‘climate refugees’ driven from their homes by changes in climate, the primary result of the developed world’s inability or refusal to understand the impacts of its development on the global environment and on others far less fortunate.

Climate change is amplifying the intensity of extreme weather events. Its impacts are now being seen in both poorer and developed countries. This year, Hurricane Sandy rendered more than 40,000 people homeless in New York City alone and just last week over 310,000 people lost their homes to Typhoon Bopha in the Philippines. Last year weather-related disasters, mainly floods and storms, displaced 13.8 million people. That’s more than the total number of residents in Illinois. Now, consider for a moment that the entire population of Illinois lost everything: their land, their homes, their possessions, their livelihoods. Where would those people go? To what would they be entitled and where?

These people forced from their homes by environmental insecurity are often referred to as ‘climate refugees’ and ‘environmental refugees’. However, these terms are neither defined nor recognised by international law. Despite their numbers, these people have neither the recognition nor protections of refugees under international legal definitions and yet they have been forced to migrate because of climate related problems. They are refugees.

The hard lesson we must learn from our collective past is that our lifestyle choices have tangible impacts on others. Nothing demonstrates this better than the impacts of climate change. Our industrialisation, development and consumerism have a price – but we in the developed world are not paying it. Instead, some of the world’s poorest countries are being made more vulnerable.

Rising temperatures, erratic rainfall, increased drought and desertification and more intense flooding and storms have a real human impact. There are large parts of the world where life is getting harder: faced with either too much water and floods, or too little water and nothing to drink, or occasionally both. Experiencing food insecurity, declining health and even the direct threats to their lives from extreme conditions or the conflicts that are blossoming in climate chaos – witness the violence of Darfur or slow tragedy being played out in the Dadaab refugee camp in Kenya where nearly half a million people barely survive. Faced with drought, the loss of their precious livestock and famine these people had no choice but to move.

I believe that environmental security is a human right. Climate change will drive hundreds of millions of people from their homes as this century progresses – each the victim of either too much water or too little and as world leaders have just concluded another round of climate negotiations in Doha and have failed to build protection for the most vulnerable it is clear we are not doing enough to protect and assist climate refugees.

Although the negotiations have resulted in a formal acknowledgement from the US and other developed nations that there will be a bill to pay for the havoc that will come from climate change and they will have to pick up at least some of tab, crucially, the talks have not shown the political leadership and ambition we need. They have failed to create a path from recognising the causes and costs of climate change to delivering the funds and the action to solve these. We now need our leaders to actually lead, fulfil the responsibilities they accepted on taking political office and act – now.

We need to remember that among the greatest threats to our collective rights and in particular to the rights of the poor, the weak and the vulnerable, is climate change. And why we must remember it is so important that the international community acts to recognise, support and protect the world’s growing number of climate refugees.

Steve Trent is executive director of the Environmental Justice Foundation.