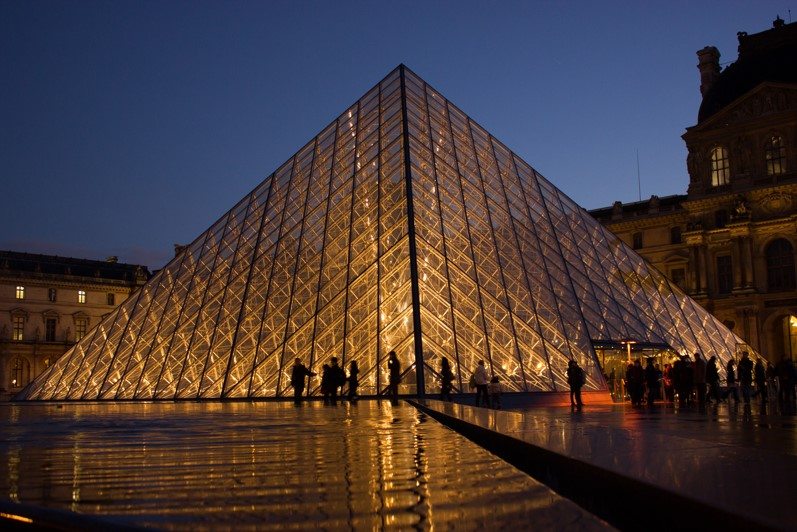 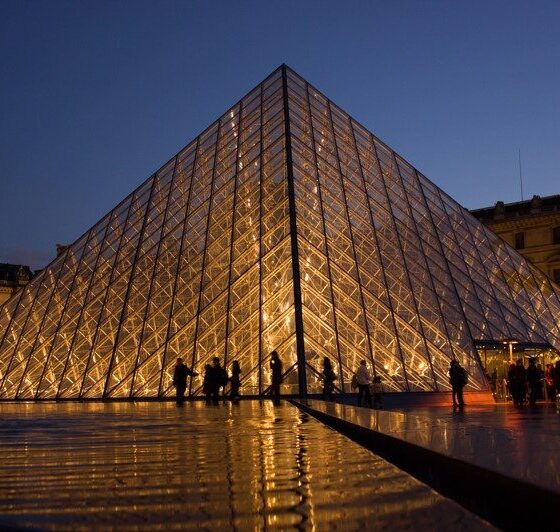 Today, hundreds of artists and climate activists staged an unsanctioned protest performance at the Louvre museum in Paris, urging the museum to cancel its sponsorship deals with the oil companies Total and Eni. Outside, in front of the museum’s iconic pyramid, they spelled out the words “Fossil Free Culture” in black umbrellas painted with giant white letters.

Despite the city’s ban on protests, artists and activists from around the world called for “a culture beyond fossil fuels, both at the COP and in our cultural institutions,” in solidarity with Indigenous and other communities’ struggles at the frontlines of climate change and oil drilling.

Simultaneously a smaller group of art-activists spilled an oil-like substance in the atrium of the museum–clad in black clothes and holding black umbrellas, the artists walked barefoot in the “oil spill”, leaving footprints on the marble floor as a symbol of fossil fuel corporations’ influence on museums. 10 participants in the unauthorized indoor performance were arrested by French police. They have been informed they may be held for 24 hours.

Beka Economopoulos from New York-based art-activism collective Not An Alternative, one of the organisers of the intervention, said: “It used to be acceptable for tobacco companies to sponsor cultural institutions. That’s no longer the case. We believe it’s a matter of time before the same is true of fossil fuel companies. When oil companies sponsor the Louvre, the Louvre likewise sponsors those companies–the museum gives these companies cultural capital and their ‘social license to operate’. On the occasion of the UN Climate Summit in Paris, we’re urging the Louvre to stop sponsoring climate chaos.”

Mel Evans, artist and author of “ArtWash: Big Oil and the Arts” was one of those arrested during the inside intervention. From jail she says: “We made a beautiful performance to challenge Total’s sponsorship of the Louvre and now the police are protecting the interests of the oil companies. With the climate talks in Paris, it’s time for galleries to go fossil free”.

This action marks the first international collaboration between a number of artist-activist groups working to liberate museums and cultural institutions around the world from ties to fossil fuel companies. This new and rapidly growing movement for a #FossilFreeCulture extends the divestment movement into the cultural sphere, calling on cultural institutions to cancel fossil fuel sponsorship contracts, divest financial holdings in the industry, and kick oil executives and climate deniers off their boards. Campaigners argue that fossil fuel companies sponsor museums and galleries in order to cleanse their tarnished brands and gain a “social license” to operate, to keep drilling and mining.

At the protest performance a red line was drawn in front of the umbrellas to call urgent attention to the struggle of frontline Indigenous communities against climate injustice. The Rights of Indigenous People’s and Human Rights are currently on the chopping block of the Paris Climate Accord.

Daniel T’Seleie, from the Dene First Nation, Canada, said: “In the Arctic, we are seeing severe impacts from global climate change, simultaneously we are defending our traditional homelands and culture  from aggressive assaults on sacred and important subsistence use areas, such as the Arctic National Wildlife Refuge. How are we to survive if the fossil fuel industry, companies such as ENI and Total continue to impede our rights? They are committing climate genocide on us, there is no way that we can allow corporations continue to generate a social license to operate by sponsoring our cultural institutions such as the Louvre.”

The Italian oil giant, Eni, has been widely criticised by environmentalists over its plans to drill in the Arctic and Total was challenged just last year over its decision to purchase a shipment of Arctic oil, shortly after it had publicly declared it had no interest in Arctic oil extraction. Total also has projects in the Canadian tar sands, one of the most carbon-intensive fossil fuels.

Ragnhild Freng Dale from Stopp Oljesponsing Av Norsk Kulturliv (Norway) said: “We know that the COP is not on route to give us the deal we need to stay within a safe limit of global warming. Oil companies like Total and Eni have business plans to keep drilling for more fossil fuels in ever riskier places, when the climate science is clear it needs to stay in the ground to protect current and future generations from runaway climate change. We need to separate our cultural institutions and the climate negotiations from oil companies’ influence.”