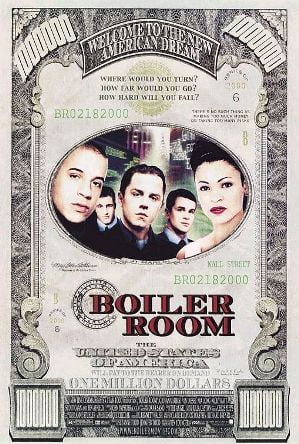 Boiler Room, starring Ben Affleck, Vin Diesel and Giovanni Ribisi, is inspired by the life of Jordan Belfort, whose story has recently been adapted in The Wolf of Wall Street, and is based on interviews the writer conducted with numerous brokers.

The film centres on a 19-year-old New York college dropout as he passes his broker’s exam and gets his first job. He’s inspired by colleagues and sets out to make his first million, however, it isn’t long before he realises that he is defrauding his clients by selling worthless stocks. His dilemma of whether or not to expose the illegal operations conducted in the boiler room is worsened when the FBI becomes involved.

Boiler Room shows the techniques and pitfalls of high pressure selling and cold calling, giving viewers an insight into how such operations are run and why they are successful. It also shows how ruthless the business world and those with a desire to get to the top, by any means, can be.

One quote in particular stands out as showing the mindset of boiler rooms and the individuals who operate them: “There is no such thing as a no-sale call. A sale is made on every call you make. Either you sell the client some stock, or he sells you on a reason he can’t. Either way a sale is made. The question is ‘Who’s going to close? You or him?’”

The human cost of the scams, such as the impact it has on a victim’s life, and the relationship between the broker and investor is also explored during the course of the film.

Boiler Room is fast paced, with a clever script that will keep viewers engaged and entertained and is highly recommend to anyone interested in the finance and investment world.

Adding Native Plants to Your Garden Helps the Environment

7 Green Ideas That Can Reduce Your Insurance Costs