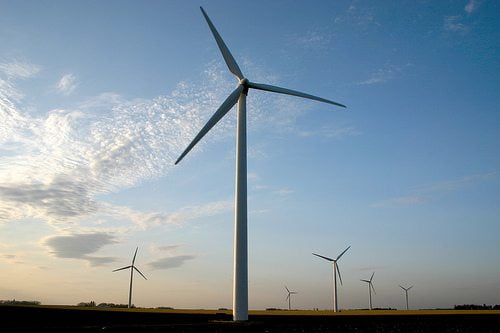 On Thursday last week, I had probably my most positive and interesting meeting with a fund manager, when I met Charlie Thomas of Jupiter Ecology fund, who had come in to update us on his fund after 10 years as the fund manager.

Despite all the negativity around the environment in the UK, with David Cameron appearing to do a U-turn on green subsidies, Thomas brushed these aside, saying he sees “real growth in renewables in emerging markets over the next 10 years“.

“Well, he would say that, wouldn’t he?” I hear you say. He is, after all, running a fund in the sustainability field and there is no doubt that you often need to take a fund manager’s comments with a pinch of salt. But I have reason to sit up and listen to him, because a year ago he told me he was starting to reinvest in renewables companies because he saw their value position turning.

Stuart Ryan, our investment manager at Holden & Partners, reminded me that I had been slightly sceptical. How right Thomas was! Renewable energy companies in the last year have outperformed the FTSE World Index by a factor of three if the performance of the Guinness Alternative Energy fund, which is up 98% year-on-year to date, is anything to go by.

The sustainability stock market has exploded

Of course it is not just this. It is that Thomas has been around managing his fund now for 10 years and he has lots of interesting insights into the market. When he started managing the fund in 2003, it was a pseudo UK equity fund with 61% of stocks invested in the UK. Today, only 20% is invested in the UK.

Thomas sees this not as a specific geographic choice but as a reflection of the universe of stocks he is able to invest in now. In 1993, the universe the fund had to pick from was 95, this had grown to 310 in 2003 and in 2013 it is now 1,200. In short the stock market has exploded for a fund manager interested in sustainable solutions.

Pollution, water and food are massive issues for the Chinese

Thomas pointed out that UK politics will not materially dent this market because it is the emerging economies who will be the ones to really drive the sustainability markets. He is recently back from a trip to China in May. “Forty-five per cent of Chinese GDP is situated in areas of water scarcity”, he said. The Chinese are aware of this and trying to address it, because otherwise this will impact on long-term development in the country.

Thomas explained too, that the rising middle classes are all too aware of the pollution they are exposed to, and telecommunications means that government cannot lock down on information. He said in Shanghai, they now put large tents over school playgrounds so children can play in filtered air. “Pollution, water and food are massive issues” for the Chinese.

It was not publicised, but while he was in Shanghai, the whole chicken population was slaughtered because of a disease issue, so there was no chicken on the menus in any of the restaurants.

Thomas concluded that the core issues of sustainability funds – water, food and energy – are moving from the niche to the mainstream, with Thomas stating that he was more excited about this sector than ever before, and it should be a part of all mainstream portfolios. So good news, which he was able to explain with reference to some great slides.

The data he could draw on and the long-term view he was able to take were impressive, but then a fund manager with a holding period for each stock of five to seven years has the ability to really consider what he is doing. If you are not turning over the portfolio every year, you have got time to do some real thinking and analysis.

Is this, though, not what we should be all paying a fund manager for? And is this not a great demonstration of why mainstream portfolios considering risk and diversification should be investing in sustainability funds?

My view is that investment is for the long-term and as a starting point, all portfolios should look to have 10% of their exposure to sustainable investment approaches.

As investors, we should be looking not only to what the future holds, or taking what Bank of England governor Mark Carney might call ‘forward guidance’, but also have an eye on risk and diversification. Sustainable investing provides an answer to both of these issues.

Investors, take note, because it is an area that Charlie Thomas is now ‘more excited about… than ever before’ and sees ‘real growth’.

Mark Hoskin is a partner at Holden & Partners, chartered financial planners who provide financial advice to high net-worth clients, the majority of whom have a significant interest in ethical or environmental issues. This article originally appeared on Blue & Green Tomorrow’s sister site, Blue & Green Investor.

Mark Hoskin is a partner at Holden & Partners, chartered financial planners who provide financial advice to high net-worth clients, the majority of whom have a significant interest in ethical or environmental issues.