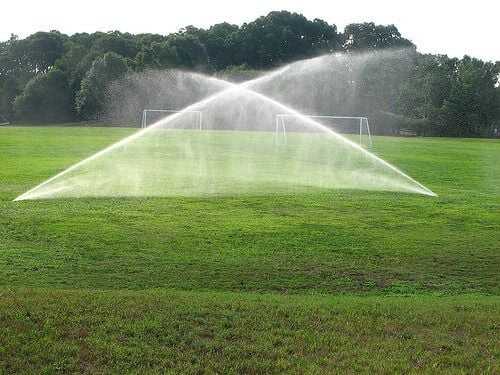 According to the Environmental Protection Agency, the average American household uses as much as 320 gallons of water every day. Around 30 percent of this is used outdoors, mostly for watering gardens and lawns. That’s a total of 9 billion gallons of residential water used each day on landscape irrigation.

The History of Sprinkler Systems

The sprinkler system’s history is intertwined with the development of municipal water supplies and dates back to ancient Rome, where water was first brought from aqueducts to homes and public places. Moving forward, in the late 16th century, waterwheels were used to move water in Europe. Although Hero of Alexandria invented a steam engine type of sprinkler in the first century, it wasn’t until many centuries later that a system was developed that could effectively spray water onto crops and gardens.

During the 18th and 19th century, steam pumps were fabricated so that major cities could have water delivered by means of pressurized systems. Wealthy families, who had extensive gardens to upkeep, wanted a way to maintain their landscapes during times when there was little rain. Though steam-powered pumps attached to hoses were used to spray plants at a distance, there was still no successful sprinkler delivery system.

It wasn’t until 1871 that New York native J. Lessler patented the very first water-propelled, fixed-head lawn sprinkler. This development was followed shortly by rotating-head sprinklers. By the turn of the 20th century, sprinkler heads had become sophisticated enough to spray an arc of water from heads made of aluminium and rubber. Some had the ability to spray water over a distance of 600 square feet. Agricultural sprinkler systems operated differently. They used rain-gun sprinklers which pushed water at high pressure. This type of system was above ground and used hydraulics or electricity to move it.

In the 20th century, underground sprinkler system arrived on the scene. These buried systems had the ability to cover separate zones of large landscapes and could be put on a coordinated programmable timer system. Such systems can be electrically or hydraulically operated, and some can compensate for rainfall and runoff.

These days, Professional Irrigation Systems are being designed with more sophistication, so they can use technology to actually help households and other facilities to conserve water. These innovative changes include features like moisture sensitivity controls. This means a system is able to detect the moisture level in the soil. If it finds there’s moisture present, it can switch off, saving water and energy. Irrigation systems can also be connected to WIFI so controlling them at a distance can be facilitated. This also enables maintenance checks to be performed remotely.

When you have a large landscape, such as a golf course, that needs watering regularly, things can get tricky. Fortunately, thanks to technology, computerized solutions for irrigation now exist. For example, a computerized control system running specialized software can enable a golf course groundskeeper to operate an irrigation system from a centralized office. This enables the controller to manipulate the system right down to individual sprinkler heads. Graphic displays show details of water distribution throughout the golf course and start and stop times can be programmed and adjusted at the touch of a button. Some software solutions allow for spraying times to be automatically adjusted depending on rainfall. These are ideal not only for golf courses, but also colleges, sports fields, resorts, cemeteries, property developments and parks. This type of irrigation management system saves time because it also enables the controller to easily see if maintenance is needed to fix damaged water lines or ruptured sprinklers. Changes can be made to modify these instances in a matter of seconds so that the problems can be fixed.

You want to make sure that the sprinkler system that you purchase will be as durable as possible. Not only is this important for your financial bottom line, but you also need to consider the carbon footprint that is left by manufacturing them. So, purchasing a system that has better longevity is also good for the environment. According to extensive expert testing, The GrowGreen and Melnor Lawn Sprinklers are both some of the best.

For farmers, irrigation is a big issue and needs to be handled efficiently. In-field moisture sensors can measure how much water soil is holding and how much of it is available for crops. This enables farmers to calculate exactly how much water is needed in a certain area and to manage irrigation as the crops grow. The sensors measure the water availability at different depths in the soil and transmit the information to computers and mobile devices.

Now is a great time to look into irrigation management systems and water sensors, particularly if you are involved in maintaining large landscapes or in agriculture. Water conservation is a growing concern throughout the world and one that must not be taken lightly. New developments in technology are helping to make this process much easier than ever before.

Holly Lewis is a garden designer with a passion for eco-living. She encourages her clients to lead a green lifestyle and can point them in the right direction through her garden services. She provides more tips and thoughts on living green in her articles.