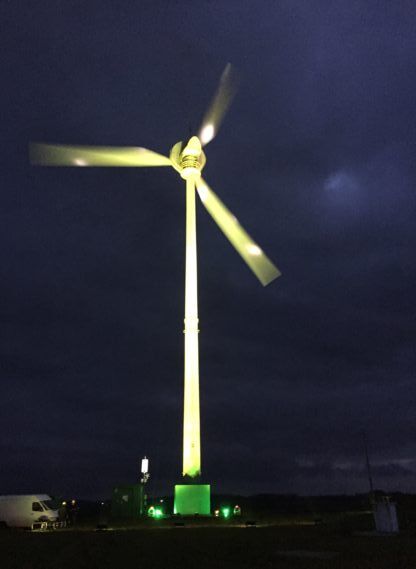 The completion of what’s called the Lynch Knoll windmill was the culmination of five years’ work for Ecotricity founder, Dale Vince, who decided that he wanted to build one on the hill that he was living on, inspired by the country’s very first windmills in Cornwall.

Much has changed since then – in the twenty years since Dale built the windmill, green energy has moved from being the preserve of ‘hippies and academics’ to a mainstream global energy industry.

This was one of the first windmills in Britain, and the biggest in the country back then

Ecotricity founder, Dale Vince, said: “This was one of the first windmills in Britain, and the biggest in the country back then. It was also the first to work without a gearbox – really a pioneering approach to wind energy at the time.

“It was born from the realisation that energy was the biggest single cause of climate change – and that we had to begin to change the way electricity is made.

“I had no horizon beyond that first windmill really. It started with just that dream, but quickly expanded into what Ecotricity is today.

Ecotricity’s first windmill was completed just before Christmas in 1996. It has since generated around 20 million units of electricity, powering the equivalent of almost 300 homes every year.

Dale continued: “This first windmill was built back in the early days of wind energy and people said all sorts of crazy things about it – like it was going to kill a thousand birds a year, ruin TV signals, reduce house prices and interfere with pacemakers – all sorts of bonkers stuff, but none of it was true, and the last two decades have confirmed that.

“Today you can still hear the same kind of claims being made, amazingly enough. But the vast majority of people in Britain – something like 80% of the country – support wind energy.

“It’s the fastest growing energy source in the world, and a major part of the energy strategy of every major economy in the world – except Britain, sadly, but that’s just a temporary bump in the road. The reality of climate change isn’t going away – if we’re to do anything about it, we have to change the way energy is made and used.”