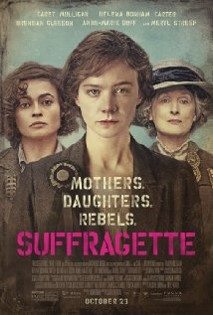 The release of the film ‘Suffragette’ brings the women’s rights movement centre stage. As a report from a coalition of democracy organisations reveals that despite progress on May 7, there is still an awfully long way to go before women are equally represented in politics.

“In late 19th and early 20th century, the foot soldiers of the early feminist movement were forced underground to pursue a dangerous game of cat and mouse with an increasingly brutal state in the quest for equal rights.” Suffragette is in movies now.

It is vital that places like Brompton are saved for future generations. The Royal Parks Foundation is looking for help to raise £500,000 to renovate Brompton Cemetery. This will unlock funding from the Heritage Lottery and BIG Lottery groups to complete the restoration.

Sara Lom, CEO, The Royal Parks Foundation, says: “The release of ‘Suffragette’ starring Meryl Streep and Helena Bonham-Carter places women’s rights firmly in the spotlight. The film will pay homage to those who brought us the right to vote, including Emmeline Pankhurst, an individual whose influence can still be felt today.

“It is vital that people who have forged Britain’s history are remembered and this is where final resting places can play a key role. The monuments in cemeteries are physical tributes to past heroes, a unique space where people can pay their respects today. Emmeline Pankhurst is buried in Brompton, one of London’s Magnificent Seven Cemeteries, which urgently requires public support for its restoration.

“The prospect of places like Brompton starting to crumble, could mean we lose vital connections with the past, its notable figures and the pivotal events they precipitated. The film ‘Suffragette’ is a powerful reminder of how rights have been fought hard for and won, but the tribute must not live solely in the cinema. Instead we urge people to take action and support Brompton to protect our past, and the memories of those heroes. The Suffragette movement had at its heart, dignity, purity and hope, values which are as important to our modern world as they were in Emmeline’s Victorian Era.”

There is more information about the conservation project here.