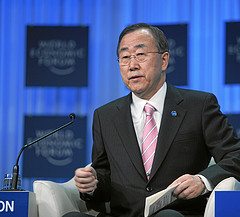 UN secretary-general Ban Ki-moon has called on the international community to unlock $100 billion (£62.5 billion) a year in financing to address the threats posed by climate change.

In a speech delivered at the International Development Finance Club (IFDC) in Washington DC, Ban said that climate change is “the single greatest threat to sustainable development” but also “one of our greatest opportunities”.

“With enlightened action, we can create jobs, improve public health and protect the environment”, he said.

He stated that investment in the latest technologies, clean energy and low-carbon infrastructure is crucial to address climate challenges especially in the developing world, which is more likely to be affected by extreme events.

“Institutional investors have an important role in decarbonising and transforming our global economy”, he added.

“Pension funds, insurance companies and sovereign wealth funds are already owners and creditors of large and predominantly high-carbon segments of the global economy. Yet only 1% of pension fund assets were invested in infrastructure projects.

“A transition to a green economy will be virtually impossible if this enormous financial asset class does not itself transition towards low-carbon assets.”

Ban also stressed the important role of development banks in encouraging sustainable finance and supporting economies facing the consequences of climate change. He said that such institutions had managed to raise $79 billion (£49 billion) in climate financing over the past year alone.

“Development banks have proven that smart public financing can spur local and international private sector investments and meet the growing demand for energy and climate resilience”, he said.

He told the public, “Our goal is mobilise political will for the negotiations, deliver concrete new commitments and spark a race to the top in climate action. I hope you will collectively use the 2014 Climate Summit to reach the goal of $100 billion-a-year for new climate finance commitments. I also encourage you to double your portfolio of adaptation financing.”