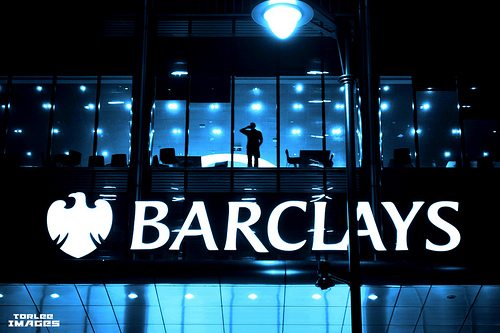 Barclays bank is to pay a record £1.5bn fine after admitting members of staff were involved in rigging the foreign exchange rate.

Barclays has reached a settlement with US and UK authorities worth over £1.5bn after it failed to ensure proper standards were maintained in its involvement with the foreign exchange markets.

The fine comes as part of a fresh wave of fines levied on banks – including JPMorgan, Citigroup, Barclays, RBS. UBS reached a £350m agreement earlier this week.

In a statement, the bank said that it had agreed to pay the fines to regulators and was taking disciplinary action against individuals involved in the scandal.

In a statement on the bank’s website, chief executive Antony Jenkins said, “The misconduct at the core of these investigations is wholly incompatible with Barclays’ purpose and values and we deeply regret that it occurred. This demonstrates again the importance of our continuing work to build a values-based culture and strengthen our control environment. We remain completely committed to that effort.”

“I share the frustration of shareholders and colleagues that some individuals have once more brought our company and industry into disrepute. Dealing with these issues, including taking the appropriate disciplinary action against the individuals involved, is a necessary and important part of our plan to transform Barclays and remains a key priority.”

The Financial Conduct Authority (FCA), the British regulator stressed the seriousness of the offences and said that Barclay’s behaviour undermined confidence in the UK financial systems and put its integrity at risk.

Georgina Philippou, acting director of enforcement at the FCA said, “This is another example of a firm allowing unacceptable practices to flourish on the trading floor.”

“Instead of addressing the obvious risks associated with its business Barclays allowed a culture to develop which put the firm’s interests ahead of those of its clients and which undermined the reputation and integrity of the UK financial system.  Firms should scrutinise their own systems and cultures to ensure that they make good on their promises to deliver change.”

The fines include $400m to be paid to the US Commodities and Futures Trading Commission (CFTC), $485m to the New York State Department of Financial Services (DFS), $710m to the US Department of Justice (DOS), $342m to the Federal Reserve System (FRB) and £284m to the FCA – which was reduced from £355m as part of an early settlement agreement.

Hannah Maundrell, editor in chief of money.co.uk said, “The impact of this scandal is monumental. The banks know what’s coming and have set aside funds to cover even the weightiest of penalties, but with ever stricter rules on capital requirements, it will be interesting to see how they intend to plug the hole”.

“On the bright side, the funds from UK penalties will go back to the Treasury and supposedly be used for the benefit of consumers. However, it’s simply impossible to tell whether this will be enough to offset the damage the forex scandal caused to British finances overall”.

Barclays has said that it has made provisions of £2.05bn to cover the cost of meeting these penalties.