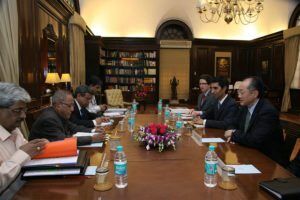 Development charity Christian Aid has graded the World Bank ‘F’ as part of the climate impact of the world’s multilateral investment banks.

Coming in last place, the World Bank was criticised for spending more on fossil fuels than clean energy, for its continued funding for exploration of yet more fossil fuels and its lack of a clear strategy to transform its investments to support the UN Paris Agreement.

This is despite the fact that it makes very strong public pronouncements on the urgency of climate change as a global problem.

The scorecard is published in the report, Financing our Future, which also grades the Inter-American Bank (D), the Asia Development Bank (E) and the African Development Bank (E). Jointly, the four development banks have financed $17.5bn of clean energy in the past 5 years, but they also spent $18bn on fossil fuels in the same period.

The report author, Dr Alison Doig, Christian Aid’s Principal Climate Change Advisor, said: “The historic Paris Agreement showed world leaders are waking up to dangers of climate change and have committed to do something about it. The World Bank should be at the forefront of this global transition to a low-carbon world, yet its investments give a confused and contradictory picture.

“With one hand they finance some innovative clean energy access projects and warn of the dangers of climate change, yet with the other they spend millions on fossil fuel exploration and development which have little impact on poverty reduction. This is despite the International Energy Agency warning that no more than a third of proven reserves can be consumed prior to 2050 if we are to keep global temperature rise under 2 degrees.

“It’s clear that all these development banks need to clean up their act and to do it quickly, especially the World Bank, which is currently bottom of the class.

“If World Bank President Jim Yong Kim wants to be taken seriously as a champion of global development he must overhaul this two-faced investment policy and get serious about ensuring clean energy access in poor countries.”

She added: “Climate change is the greatest threat to development, so to have development banks investing in fossil fuels is deluded. Instead these banks need to play a catalytic role so that people living in poverty can access sustainable energy that meets their needs.”

The report shows that all the investment banks have good examples of backing renewable energy projects in the developing world, yet they all score disappointingly low on the clean energy scorecard. This assesses total spend on renewables verses fossil fuels, their policies on fossil fuel phase out, how supportive they are for clean energy access and the transparency on the carbon footprint of their investment and strategy to reduce it.

Dr Doig added that the UK Government had a key role to play in reforming the banks and encouraging them to get their act together.

She said: “The Department for International Development has taken positive steps, including its Energy Africa campaign which aims to extend the use of solar powered electricity to light up African homes and businesses. This 21st century energy supply is sustainable, affordable and reliable. It is exactly this kind of energy access initiative we need to see more of.

“We need the UK to knock heads together in the development community and ensure policies and investments which will deliver the Paris Agreement.”

The report concludes with three recommendations that would help make the development banks fit for purpose.

1. Ensure the carbon emissions of their funding portfolios is publicly available and set clear targets to reduce the carbon footprint of their investments and their exposure to climate risk

2. Support developing countries to achieve their greenhouse gas reduction commitments by phasing out financing for fossil fuels by 2020, and instead prioritising financial support for delivery of countries’ commitments under the Paris Agreement.