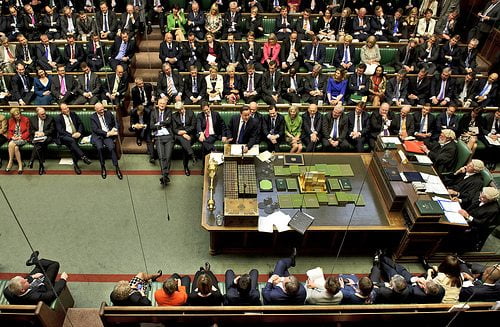 David Cameron has defended the government’s position on bankers’ bonuses at the Royal Bank of Scotland (RBS), but said he would veto any attempt by the bank to increase its overall pay and bonus bill.

The Labour party on Wednesday urged the chancellor George Osborne to block moves by banks to pay top executives bonuses of up to twice their annual salary. At prime minister’s questions, Labour leader Ed Miliband said that a £1m bonus “should be quite enough”.

The government currently owns an 80% share in RBS, and as majority shareholder, is in a position to block any decision made on bonuses. However, Cameron insisted that he would not determine the amount paid to individual bankers in bonus payments, instead saying that he would veto any attempt to increase the overall pay and bonus bill.

This decision was criticised by Labour’s shadow chief secretary to the Treasury Chris Leslie. He said, “A cap on total remuneration is a complete red herring because RBS is cutting another 2,000 jobs in its investment bank and many executives were paid bonuses worth more than 100% of their salary last year.

“We need change and reform of our banks, not the business as usual approach of David Cameron and George Osborne.”

Osborne insisted that the government had done more than the previous Labour government to control the banks.

Eyebrows have been raised among some academics regarding paying large rates of remuneration. Andre Spicer of Cass Business School in London said, “Paying bankers large bonuses for short-term performance is a recipe for disaster. It incentivises very risky behaviour, undermines performance, destroys shareholder value, and creates systemic problems the taxpayer is forced to cover.”