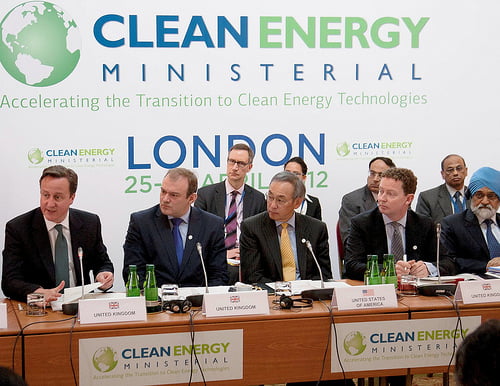 Introductory “remarks” made by Prime Minister David Cameron at the Clean Energy Ministerial (CEM) in London this morning failed to deliver the strong governmental strategy for renewable energy that was so desperately required.

The Prime Minister instead skirted cautiously around the subject in a short speech that was rife with corporate jargon and vague green commitments.

“Renewables are now the fastest growing energy source on the planet. And I am proud that Britain has played a leading role at the forefront of this green energy revolution”, he said.

Cameron added that the use of clean energy was “not just good for environment but very good for business too”, in a statement that echoed the similarly actionless words of his colleague George Osborne, who said, “Environmentally sustainable has to be fiscally sustainable too”, in his unsustainable budget speech last month.

Davey was lumped with the task of giving a speech in place of the Prime Minister, who on Tuesday cut down his own contribution at the CEM, which sees 23 of the world’s leading energy ministers gathered in one room to discuss global action.

He added, “We heard yesterday from ministers in countries like Germany and Denmark who clearly get the scale of the challenge and the opportunity, but it’s not clear this government does.

“They are talking in terms of hundreds of thousands of new jobs in the renewable energy sector, whereas the PM today was only talking about a few hundred.

“We agree that renewables must be “financially sustainable”, but businesses and investors need consistent messages from across government, and not the series of ill-judged attacks in recent months, including from the Prime Minister’s own Treasury and some backbenchers.”

Meanwhile, Friends of the Earth’s executive director Andy Atkins said, “This falls a long way short of the green speech David Cameron should have given – tipping his hat to the need for a cleaner future and recycling a few announcements just won’t measure up.

“While the nation is in recession, the green economy is growing at 4% – developing clean British energy enjoys huge public support and could provide thousands of new jobs and cut fuel bills.

“Shortly after coming to power [he] promised to lead the “greenest government ever” – almost two years later we’re still waiting for him to spell out how he’s going to achieve this.”

Reducing his first ever keynote environmental speech as Prime Minister caused outrage within the green energy community. Short though the address was, it still had the potential to at least deliver a strong and positive message.

“Today’s speech by the Prime Minister could have been a clear message that the UK is open for green business”, pointed out Mark Kenber, CEO of The Climate Group.

“It should have sent a clear signal to investors. Especially after two years of Prime-Ministerial silence. It did not.

“Instead it effectively reiterated the false dichotomy between “non-affordable” renewables and “affordable” fossil fuels, in effect cementing the government’s clear preference for the latter.

“Today the PM sided with those in his government that feel that the green agenda is a “burden“. It is a costly, short-sighted error of judgement.

“This is more than a missed opportunity. It is not only a failure of leadership. It is nothing short of neglect of Britain’s economy and future.”

Blue & Green Tomorrow will be on hand to report on the specific commitments made at the CEM by participating countries and private sector leaders to promote energy efficiency, renewable energy and increased global energy access.