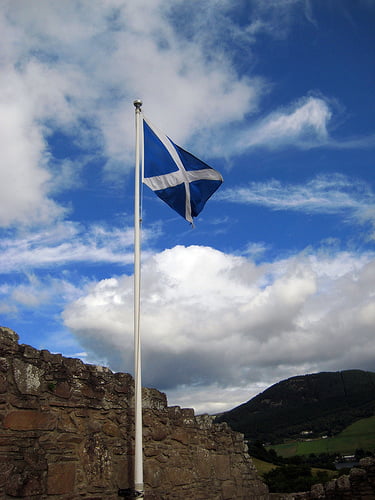 As it’s St Andrew’s Day, we round up some of the stuff we’ve written about Scotland in the past year or so, ranging from innovative renewable energy plans to the housing of the Green Investment Bank.

Every year on November 30, Scotland celebrates the life of its patron saint, Andrew, a first century martyr whose crucifixion on an X-shaped cross is the inspiration behind the country’s flag.

As the northern-most nation in the UK, it is historically known for haggis, bagpipes, kilts, Irn Bru and its wet, blustery climate. And while the first four things on the list are often used as stereotypical Scottish items, the last one has allowed the country to take serious, innovative steps in harnessing its plentiful natural resources for energy.

In October, first minister Alex Salmond announced that Scotland will be producing half of its electricity from renewables by 2015 – five years earlier than planned – after Department of Energy and Climate Change (DECC) figures showed that some 35% of the country’s power came from clean sources in 2011.

This marked a huge leap forward for Scotland, which is home to a significant proportion of Europe’s wave and tidal capacity, while only housing 1% of the continent’s population.

The Marine Renewables Commercialisation Fund, steered by the Carbon Trust, formed part of the £35m committed by the Scottish government and its enterprise agencies to specifically support the transition of demonstrator wave and tidal power schemes up to commercialisation between now and 2015.

And the country further displayed its allegiance to marine renewables after revealing in August that the “world’s first community-owned tidal turbine” would be constructed off its coast.

Statistics compiled by DECC in June outlined how Scotland was set to become the UK’s leading location for attracting renewable energy investment. The department claimed that some £8 billion worth of investment is expected to be pumped into the Scottish renewables industry, creating over 3,300 jobs in the process.

But fighting back against the country’s innovation into renewables is a select group of individuals, led by US tycoon Donald Trump, who plan to derail further clean energy investment in Scotland – specifically, into wind power.

In 2011, Trump launched an international tirade against the Scottish government’s plans for an offshore wind farm to be built a mile and a half away from his £750m luxury golf resort at Menie estate in Aberdeenshire.

“With the reckless installation of these monsters, you will single-handedly have done more damage to Scotland than virtually any event in Scottish history”, he wrote in a letter to Salmond.

But Salmond stood firm, claiming that the government were intent on capitalising on Scotland’s vast offshore wind potential, which he claimed accounted for up to a quarter of Europe’s capacity. And only last week, Scottish MPs dismissed Trump’s claims that renewable energy development in Scotland was damaging the country’s tourism, boosting plans for the offshore wind farm at Aberdeenshire to be built.

Scotland’s advancement in green energy meant its capital, Edinburgh, was one of the key contenders to be named as headquarters of the government’s Green Investment Bank (GIB). And sure enough, business secretary Vince Cable revealed in March that the Department for Business, Innovation and Skills (BIS) had selected the city as home for the GIB – to somewhat mixed reaction across the UK.

However, its offices were finalised in August this year and on Wednesday, Cable cut the bank’s ribbon and announced it was open for business.

“Having the headquarters in Edinburgh is a powerful vote of confidence in the union, and a testimony to our commitment to helping Scotland lead the green revolution”, he said, adding another string to Scotland’s ever-expanding, and increasingly commendable, green bow.