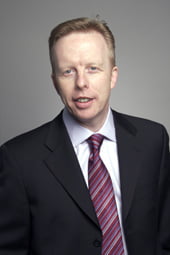 “I am delighted that we have been able to appoint people of such high calibre to the board of the UK Green Investment Bank”, said business secretary Vince Cable.

“I have every confidence that the team will build on the good progress already made, leading the bank into full operation and developing a truly ground breaking institution.”

Kingsbury was previously responsible for European activities at Hudson Clean Energy Partners. Before that, he founded Pulsar Energy Capital and advised international investment firm 3i.

On top of this, he also sits on the board of the British Venture Capital Association’s Energy, Environment and Technology Group and established the Low Carbon Finance Group, an independent group made up of senior figures in energy finance.

In a brief statement after his appointment to the GIB, Kingsbury said, “I am delighted to have been given the opportunity to become the first chief executive of the UK Green Investment Bank.

“The bank has the important and exciting principal task of allocating capital to projects which can both enhance economic competitiveness and provide leadership in environmental business performance.”

He will join GIB chair Lord Smith of Kelvin and deputy chair Sir Adrian Montague, both of whom have significant expertise in financial services and were installed into their roles at the bank in May. Lord Smith recently revealed that the bank was on the verge of finalising its headquarters in Edinburgh.

It was announced in June that the GIB’s £3 billion kitty will be put towards 20 “big ticket deals” for the first three years, but it needs state aid approval before it can officially begin lending.

KfW, which last year borrowed €18.4 billion for green projects, was named as advisor to the GIB back in April, with many seeing the German bank’s business model as something the UK version can emulate.

Kingsbury and the six non-executive directors, which also includes Tessa Tennant – the founder of the Jupiter Ecology Fund, often credited as becoming the UK’s first green investment fund upon its launch in 1988 – will each take up their roles in October.