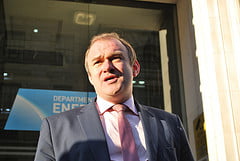 Energy secretary Ed Davey has delivered a clear signal over his views about the controversial shale gas extraction method, fracking, saying that the technique might not be as pivotal to the UK’s energy mix as once thought.

Speaking at Confederation of British Industry (CBI) meeting on Monday, Davey argued that “cheap gas” was not the sole answer to the country’s “investment and carbon problems”, saying that prices were still too volatile to rely on it completely.

“Yes, prices can go down, as well as up. And yes, unconventional gas can make a difference, although perhaps not as big a difference as some sections of the press would have me believe”, he was quoted saying in The Financial Times.

“Analysts think shale gas extraction in Europe will be more expensive than in the US, and probably won’t happen at scale until the end of this decade.

“And we’re competing with fast-growing economies which are hungry for gas.

“Demand in the Middle East is rising steeply. China alone is expected to double its demand by 2017. No wonder the consensus is that gas prices will either remain high, or go higher.”

Davey’s words come after Lord Smith, chairman of the Environment Agency, publicly backed fracking in an interview with BBC Radio 4’s Today Programme, despite fears over the extraction method’s safety.

And a report released shortly after by the International Energy Agency (IEA) warned that future development of the technique could terminate support for renewable technologies.

Fracking occurs when a solution is inserted into shale rocks until they fracture and subsequently release natural gas, which is then used for energy.

It has been widely mentioned that the new environment secretary Owen Paterson stands firmly in the pro-fracking camp, so Davey’s comments will be food for thought for him and the chancellor George Osborne, who is similarly in favour of the method.

On the same day that Davey spoke at the CBI meeting, three of the UK’s leading environmental campaign groups voiced their own concerns over fracking.

Friends of the Earth, the WWF and the RSPB issued the government with a stark warning over the potential impacts of extracting gas in this way, saying that more research needs to be done in order to fully understand its effects on the environment.

“The government must halt shale gas drilling to properly assess the risks – including the impact on climate change”, said Andy Atkins, Friends of the Earth’s executive director.

“With big changes to our electricity system due in the months ahead, energy secretary Ed Davey must resist calls to hook the nation on polluting gas that has been the main drive of rising energy bills, and instead back a switch to home-grown clean energy.

“Britain has some of the best wind, wave and tidal resources in Europe – developing them will bring in investment and create thousands of jobs.”

Davey appears keen to develop low-carbon and renewable technologies over unconventional gas extraction methods like fracking. Strong, informed investment in clean energy is not only the safest option available, but it’s also the securest and most abundant.