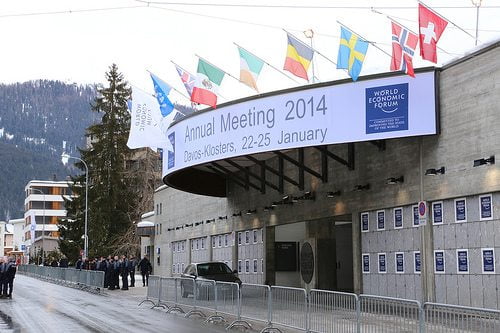 An annual PricewaterhouseCoopers (PwC) survey of more than 1,300 CEOs found that 39% were “very confident” their company’s revenues would grow in 2014, an increase of 3% from last year.

Respondents were also noticeably more optimistic when it came to assessing the global economy, with 44% saying they believe the global economy will improve in the next 12 months, a sentiment shared by just 18% last year.

However, the survey revealed that CEOs still hold a number of concerns for the future.

“Even though there is a higher degree of optimism about the global economy, there are still some pretty big challenges elsewhere to do with the volatility of certain economies, concerns around regulation and shifts in technology”, said Dennis Nally, chairman of PwC International, while presenting the survey at the forum.

After watching a debate between bank executives and their critics, almost 40% of the Davos audience also said that bankers still hadn’t made markets safer.

In other news from the Swiss municipality, Australian bank Westpac was awarded the title of “world’s most sustainable company” in a ranking compiled by Canadian researchers Corporate Knights.

The firm said in a statement, “Westpac has a long history of leadership and innovation in corporate sustainability. It was the first bank to join the Australian government’s Greenhouse Challenge Plus and the first financial institution in Australia to create a matching donation programme.”

The bank was the first in Australia to establish an environmental policy over 20 years ago, and is a leading partner of the Climate Partners Network with the Climate Institute.

“It is wonderful recognition of the work of our people to help create a sustainable future and deliver long-term value for our customers, employees, shareholders and the community”, Westpac chief executive Gail Kelly said.

Under its sustainability strategy, Westpac has committed up to $6 billion (£3.18 billion) for lending and investment in clean technologies and environmental services.

However, in August the bank’s environmental credentials were questioned when it emerged Westpac was the guarantor of a controversial logging project that reportedly threatens thousands of acres of rainforest in the Solomon Islands

Its inclusion wasn’t the only time eyebrows were raised. Statoil (fourth) and Shell (51st) both appear in the list, despite having drilled for fossil fuels in the vulnerable Arctic region in recent years. Adidas (eighth), Coca-Cola (43rd) and Enbridge (75th) are all also included, despite criticism over labour rights, adverse health effects and tar sands respectively.

Corporate Knights noted that the world’s 100 “most sustainable” companies had outperformed the broader market by an average of 3.2% over the last year.

“The results speak for themselves. Topping a well-diversified benchmark is not easy, but the Global 100 has managed to squeak out marginal outperformance across a turbulent period in the history of the capital markets”, chief executive Toby Heaps said.

“We attribute this excess return to the growing investment relevance of core sustainability themes, including water scarcity, rising energy prices and growing competition for human capital.”