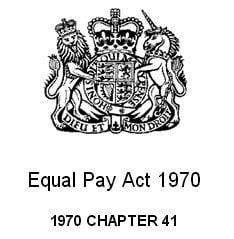 Despite the Equal Pay Act 45 years ago, women still earn less than men in Britain today

The current gender pay gap means that women effectively stop earning relative to men on a day in November. This day is referred to as Equal Pay Day and varies according to the actual pay gap each year – in 2015 Equal Pay Day is the 9th of November.

The Equal Pay Act 1970 is an Act of the United Kingdom Parliament which prohibits any less favourable treatment between men and women in terms of pay and conditions of employment. The Act has now been mostly superseded by Part 5, chapter 3, of the Equality Act 2010.

Overall, women can expect to earn significantly less than men over their entire careers as a result of differences in caring responsibilities; clustering in low skilled and low paid work, the qualifications and skills women acquire; and outright discrimination.

The current overall gap for full time workers is 14.2%. Join the Fawcett Society’s Equal Pay Day campaign and take action. Tweet @fawcettsociety with #PayGapPledge and tell them what you’ll be doing to help end this inequality. Here are some of their ideas and actions you can pledge to do:

– Ask your employer whether they know about the new regulations which are due to come in to force next year, requiring organisations with over 250 employees to publish their gender pay gap figure and whether they are ready to implement this change

Some well-known people have also been pledging to do their bit:

“‘I won’t stop fighting for equal pay until every woman and man is treated equally.” Kate Green, Labour MP.

“I will ensure the Government’s strategy on reducing the gender pay gap properly focuses on those most affected – women aged over 40.” Maria Miller MP, Chair of the Women and Equalities Select Committee.

“We are the only political party that will tackle all the causes of unequal page, rather than tinkering around the edges. #PayGapPledge.” Sophie Walker, Women’s Equality Party

Joining the Fawcett Society or buying from their shop also supports the work they do in fighting to end the gender pay gap.