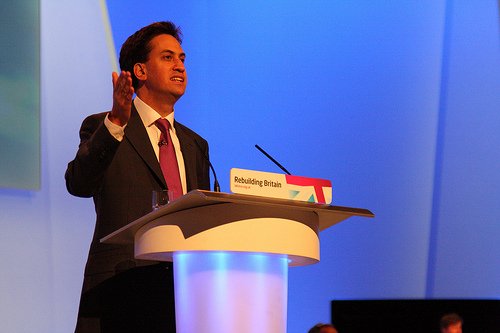 In a speech that was light on policies in general and sustainable policies specifically, Ed Miliband made one comment very early on that resonated at Blue & Green Tomorrow. Leaving the world a better place than we found it is a core principle of sustainability and we are far from doing that.

Ed Miliband was the secretary of state at the Department for Energy and Climate Change under the last Labour government. There was little evidence of that portfolio in a speech that was very personal, often entertaining, clearly motivating for the party he leads and, dare we say it, prime ministerial.

It is politically adroit to move onto the centre ground in British politics. It is not at the extremes of left or right, authoritarian or liberal, that general elections are won. Elections are won in the centre where the floating voters, er, float. By borrowing Disraeli’s One Nation clothes from the Conservatives, Miliband has certainly taken the fight to the prime minister and coalition, and probably won over many doubters in his own party.

Clearly the focus groups and party soundings told Miliband he needed to appear a lot less wonkish and a lot more normal, which he mostly succeeded in. Gone were attacks on ‘predators’, apart from an amusing aside to his three-year-old son’s advice on what the speech should contain (flying dinosaurs apparently) or ‘predistribution’. Also gone, sadly, was any discussion of renewable energy and energy security.

This is a missed opportunity. The overwhelming majority of British people support growth in renewable energy, despite what the national press would have us believe. A far greater percentage in fact than have ever supported any party of government of any colour or persuasion.

There are legitimate concerns which need to be addressed, about views and house prices, damage to areas of outstanding natural beauty, killing wildlife, noise pollution and the distorting effects of government subsidies (most of which go to the oil and gas industry incidentally). These all need to be addressed sympathetically, even if they tend to be highly questionable risks or overstated.

Leaving our country, never mind our planet, in a better place than we found it needs a new economic and energy settlement. Irresponsible, unethical and unsustainable investment, consumption and transportation do not form part of that settlement.

And neither does energy generation that leaves our country as a net importer of fossil fuels, subject to the vagaries of the global commodities market, or accelerates resource scarcity and pollution. Especially when we have the skills and natural resources to have a limitless supply of clean energy, with all the economic benefits such innovation would create.

Ed Miliband may have done what he needed to bury charges of wonkishness and being a ‘Red Ed’, but we would like to see a lot more Green Ed as we draw closer to the general election in 2015. A few more flying dinosaurs would be brilliant too.

Over to you Mr Cameron.