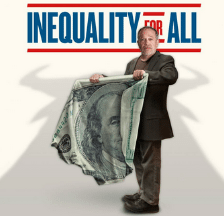 Political economist Robert Reich’s eagerly-anticipated Inequality for All documentary film is currently showing in US cinemas. An investigation into the country’s growing income gap, Reich explores what this disparity is doing for the US economy.

Much of the praise for the film must go to Reich himself, whose passion and charm come across in abundance. As a former aide to presidents Gerald Ford and Jimmy Carter, and labour secretary in Bill Clinton’s government, Reich comes into the documentary with a wealth of economic knowledge and an impressive CV.

The politically neutral Inequality for All shows who has the wealth, who doesn’t have the wealth and how the gap in between is getting bigger. Most importantly, though, it looks at what needs to be done to close it.

Blowing preconceived ideas out the water with some incredible – and frankly, scary – statistics, it should be required viewing for everyone who is interested in the future of the global economy, not just America’s.

In February, the Guardian asked whether the film would become “another Inconvenient Truth” in a nod towards former US vice-president Al Gore’s seminal documentary about global warming.

It’s a tall order – to become one of the most important, game-changing documentary films of all time – but if any film can follow in An Inconvenient Truth’s footsteps, it’s Inequality for All.