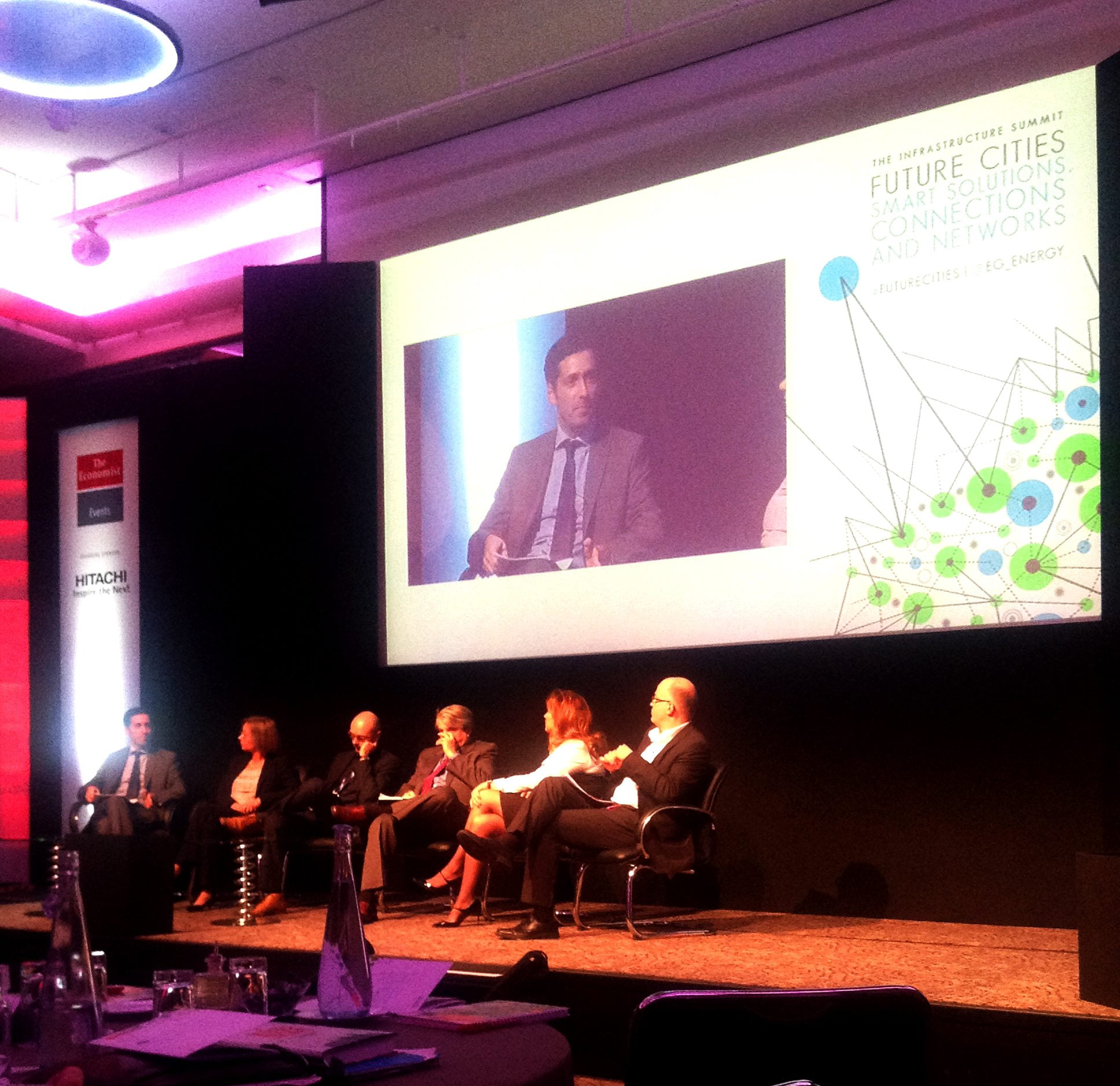 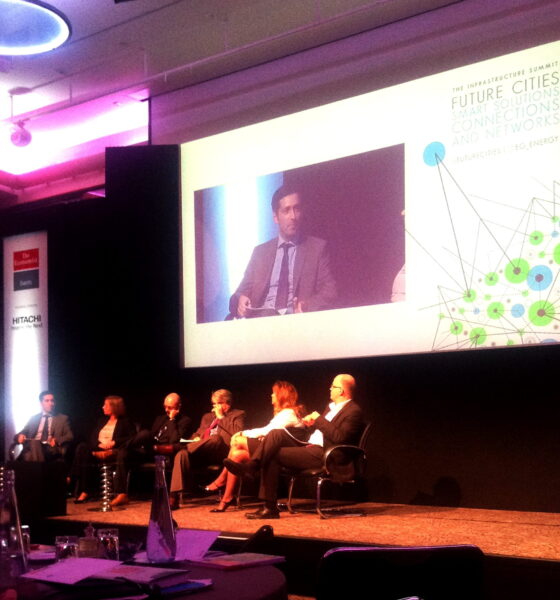 The impressive Grange St Paul’s Hotel in London was the location for the Economist Events’ Infrastructure Summit on Tuesday, during which a wide range of international experts discussed the future of cities.

The Future Cities event, sponsored by electronics firm Hitachi, was running with the tagline, “Smart solutions, connections and networks”.

As outlined in the Economist’s online business and finance editor Ludwig Siegele’s introductory address, the summit aimed to look at some of the challenges that governments and policymakers will have to address by 2030, when it is predicted that more than 60% of the world’s population will be living in urban areas.

The first speaker was Benjamin Barber, senior research scholar at the Graduate Centre of the City University of New York. Barber’s latest book, If Mayors Ruled the World, explores the role that mayors will have in shaping future cities. He said nations and states have failed to address the “trans-border challenges that we are experiencing in an increasingly interdependent world”, such as climate change, terrorism or pandemics.

Barber suggested that mayors – and therefore cities – have instead proven capable of take effective action, because they are “pragmatists by nature”.

He said that in the US, 78% of the public trusts their mayor, compared to the 8% of people trusting the national government. This happened because mayors focus more on the community and are more independent than their national counterparts.

“There is not a Democratic or Republican way to pick up the garbage”, Barber said.

The second guest speaker was Pippa Malmgren, president and founder of Principalis Asset Management. She focused on the effects of inflation on emerging economies and wondered whether ‘megacities’ will be a place for rich people only, as low and middle class citizens are hit by food and energy price increase, which could cause potential social unrest.

Barber and Malmgren were joined by Matthew Pencharz, mayoral adviser on the environment for the Greater London Authority; director of sustainability consulting firm Arup, Mark Watts; and Jaana Remes, head of the McKinsey Global Institute.

The panel discussed ways in which small budgets could be used for clever investment in cities. Remes pointed out that cities cannot always act independently. Watts added that sometimes there might be competition between cities, but mayors are definitely better able to address environmental challenges because they can grasp opportunities for green growth more than national authorities.

The debate also touched on the controversial HS2 project, with Malmgren arguing that foreigners would be interested in investing in the project, allowing the government to decrease the cost of the proposed rail network

The second panel of discussion started with professor of urban studies and director of London School of Economics’ Urban Age centre Ricky Burdett showcasing some impressive but worrying data about the future projections of urban populations.

Burdett said that 80% of energy consumption occurs in cities and 75% of carbon dioxide (CO2) is produced in urban areas. Cities in developing countries are growing faster than any other and are set to increase even more, ‘eating’ most of the countryside by 2050.

Kit Malthouse, Greater London Authority’s deputy mayor for business and enterprise; head of carbon management at the Carbon Trust, Tim Pryce; and CEO of Houston Arts Alliance Jonathon Glus, gathered to discuss “What should our cities be like?”

Malthouse said that London compensates for its size with an efficient network of public transport. His point referred to Burdett’s claim that people in Hong Kong take 11 minutes to commute on average, because they usually live near to where they work. Nevertheless, London’s infrastructure needs constant attention, having been first planned after the second world war. Glus gave an example of how private and public investment need to be balanced, by quoting the way in which cultural infrastructure is developed in the US in order to be more accessible to everyone.

Pryce then noted that current cities developed in an era where land and energy were far cheaper than now, and therefore cities “need a framework” to deal with increasing pressure on resources. The didscussion at this point went slightly astray, into a debate as to whether it is right to plan everything in cities and make them looking like “the inside of a Sainsbury’s”, as Malthouse said, instead of leaving them to an unsure, chaotic, organic and creative destiny. Pryce argued that given the uncertainty caused by climate change and its consequences, a plan for cities to deal with challenges was essential.

An interesting point was raised by a member of the audience about the phenomenon known as gentrification. How to improve an area of a city without causing its people to leave because of the redevelopment effects on housing and lifestyle prices? This issue raised questions on whether policymakers have to work for the citizens or for the city itself.

The following debate was around technology’s role in cities and how to use it to create the so-called smart cities.

Smart cities essentially look at technology to solve part of their problems, such as access to transport or traffic congestions. However, as the panel noted, smart cities not always mean better cities, especially when technology is given too much autonomy. Who is going to control it?

As Sennett said, Google Maps will tell the user which way is the quickest – but not the most interesting one to get to a place. Google’s representative replied that this trouble needs to be addressed by putting users at the heart of the business.

A flexible, user-friendly and constantly updated technological service, so that the physical and virtual infrastructure can co-operate, will be essential to future cities, the panel argued. At the same time, as Charbel Aoun from Schneider Electric noted from the audience, smart cities need to become ‘real’, as many people do not really understand what they are.

The last speech of the morning session was made by Sascha Haselmayer, CEO of the innovative Citymart.com. According to Haselmayer, cities across the world often found creative ways to address some of the citizen’s problems through technology, such as the use of intelligent traffic lights to help blind people who lost their way.

What cities have failed to do is to communicate and share the ideas to a great audience in order to suggest similar solutions elsewhere. Citymart acts as a “market place”, where cities are the consumers looking for products and services. When cities manage to share ideas, they can save huge money, as shown by Haselmayer, and work efficiently for the citizens.

Speaking about the technicalities involved, the panel highlighted the need for the transport sector to interact with other infrastructure systems. Dix was asked by the chair whether information technology will reduce traffic in cities. She said she believed that it might help spread it, but it would hardly eliminate it and she brought as an example online shopping, where instead of get in the car and go buy something, we order it online and make a van coming to us.

The last discussion panel included Charbel Aoun, vice-president of Smart Cities at Schneider Electric; Simon Hill, vice-president of OPower; and David Helliwell, CEO of Pulse Energy. They were tasked with discussing how to make smart grids successful, and focused on the need of continue engagement with consumer to achieve behavioural changes in energy efficiency.

It was suggested by the panel that by making data on energy usage available to cities and individuals in “visual and creative ways”, as suggested by Aoun, people would have a clearer idea of how much energy they use and would be more likely to change their behaviour.

User data, Hill said, can be used to create a “smarter energy system”, as despite the existence of good technology and innovation, many energy policies often lacks this. Hill also said that in a US survey, it was revealed that consumers are more likely to change behaviour because others have done so, rather than for environmental or economic reasons.

This panel failed to mention the words ‘carbon’ or ‘climate change’ until Barber, now sitting in the audience, pointed it out. Hill replied that energy efficiency was intrinsically carbon saving, while Helliwell said that in British Columbia, Canada, the carbon tax had worked very well and was essential to improve environmental performance.

The final speech of the day was an inspiring set of remarks by Stian Berger Røsland, governing mayor of the city of Oslo, who illustrated the improvements planned to make the wealthy Scandinavian city become smarter.

Røsland said that the local government was working to make Oslo “smarter, safer and greener”, by improving urban areas, investing in smart technologies, preventing crime and terrorism (Norway is still recovering from the 2011 Utøya tragedy) and maintaining a “blue and green profile”, despite its long history of producing oil (we were, understandably, very pleased to hear that particular phrase).

In fact, Oslo is planning to cut its greenhouse gas emissions by 50% by 2050, make public transport become fossil free by 2020 and increase the use of waste – partly buying this from the UK and other countries – and bioenergy for heating.

Røsland also mentioned the Scandinavian 8 Million City, a project which would see the region become more and more interconnected to compete on the global market, for instance by connecting capital cities with high speed trains.

Barber closed the event, saying that cities and local authorities will play key roles in addressing climate change, if they can manage technology wisely and effectively and make a distinction between “consumers” and “citizens” – two terms that were used interchangeably throughout the day, but that in fact have different meanings.

The thought-provoking day perhaps neglected the possible environmental consequences of large-scale urbanisation, like the one predicted. What would happen to those people living, working and enjoying the countryside? How will their environment change? Will we have a ‘smarter’ countryside too? What about the wildlife?

It might sound appealing to commute to work in 10 minutes, but doubt remains as to whether the quality of our life will improve. We are seeing inaction on reducing greenhouse gas emissions and it could be argued that before making our cities smart, we – as global citizens – should somehow become smarter ourselves.