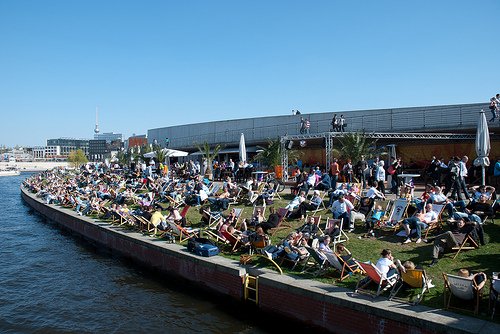 Germany’s solar installations well and truly soaked in the sun over the weekend, working overtime to provide a peak of 22 gigawatts (GW) of electricity per hour.

This figure accounted for 40% of the total power generation in the country at noon on Saturday – a world record according to the Institute of the Renewable Energy Industry (IWR).

“Germany came close to the 20GW mark a few times in recent weeks. But this was the first time we made it over.”

Some 650 megawatts of new solar capacity were installed in Germany in January and February alone this year – almost double the amount during the same period in 2011 – as the country looks to fill the void left in its energy market by its nuclear phase-out post-Fukushima.

Eight nuclear plants have already been closed by the German Government, with nine more facing shutdown before 2022. At its peak, the power generated by the country’s solar array was equal to 20 nuclear plants.

The record output from the solar market will provide Angela Merkel with food-for-thought, given the German chancellor has tried to fast-track cuts to the country’s successful feed-in tariff scheme.

Boasting similar climates, the UK Government should see Germany’s record-breaking solar achievements as inspiration to further its own solar market, which last week received somewhat of a reprieve after it was announced that cuts to the FiT were to be delayed until August.