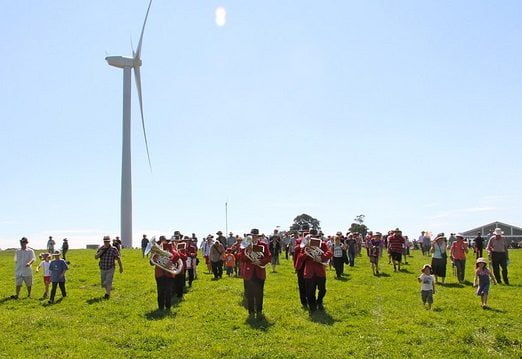 Communities will be financially rewarded for living near onshore wind developments under new plans unveiled by the government. But the industry has warned that this might deem some projects “uneconomic”.

As revealed by the Financial Times on Wednesday, local people are set to be given a voice over wind farms near their homes. The Department of Energy and Climate Change (DECC) said that current planning decisions don’t always take communities into consideration.

The government therefore hopes its new proposals will encourage greater engagement between developers and locals, while also reducing opposition.

Energy secretary Ed Davey said, “It is important that onshore wind is developed in a way that is truly sustainable – economically, environmentally and socially, and today’s announcement will ensure that communities see the windfall from hosting developments near to them, not just the wind farm.”

Meanwhile, communities secretary Eric Pickles said the government wanted to “give local communities a greater say on planning, to give greater weight to the protection of landscape, heritage and local amenity.”

Eighty-two per cent of respondents of a recent DECC poll said they backed renewable energy. And although the percentage behind onshore wind specifically was slightly lower at 68%, this still represents a clear majority.

The wind industry has generally reacted favourably to the government’s updated plans for the technology, which have been released just two days after MPs voted against amending the energy bill so that it included a decarbonisation target. Maria McCaffery, chief executive of trade body RenewableUK, said that the proposals will “help shape the way [the] industry engages with local people even more closely in the future.”

However, she added, “Developing wind farms requires a significant amount of investment to be made upfront.

“Adding to this cost, by following the government’s advice that we should pay substantially more into community funds for future projects, may unfortunately make some onshore wind energy developments uneconomic in England, so they will not go ahead and that is very disappointing.

“That said, we recognise the need to ensure good practice across the industry and will continue to work with government and local authorities to benefit communities right across the country which are hosting our clean energy future.”

Friends of the Earth’s head of campaigns Andrew Pendleton said the government’s plans would “scupper” onshore wind, adding “Another day, another government attack on efforts to tackle climate change.”

Meanwhile, Nick Molho, head of climate and energy policy at WWF-UK, called for consistency from government when it comes to planning. He added that policymakers should “impose similar rules on other parts of the energy sector, such as onshore shale gas development.”

Hydraulic fracturing for shale gas – also known as fracking – is seen as crucial to the UK’s future energy needs by some, including the chancellor George Osborne. A recent study by fracking firm IGas found that there could be nearly 20 times more shale gas in the UK than previously thought.

But many claim a ‘dash for gas’ would displace investment in clean energy, and there are also concerns over fracking’s environmental impact. For these reasons alone, shale gas extractors are likely to receive significant opposition from local people – and perhaps to a greater extent than onshore wind.

DECC has launched a call for evidence on the community benefits of onshore wind. It’s said to have used 100% renewable electricity supplier Good Energy’s Delabole Local tariff as a case study for its draft proposals. The firm launched the discount scheme in January, offering local people near a Cornwall wind farm 20% savings on their electricity bills.