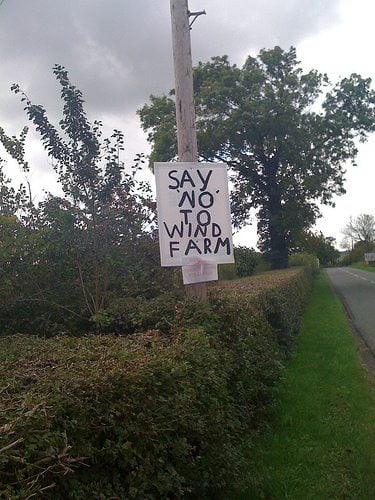 Government proposals to give communities more say over onshore wind developments could make it easier for vocal minorities to prevent projects from happening.

The Department of Energy and Climate Change (DECC) said on Thursday that communities would be financially rewarded – through discounts on their energy bills – for living near wind farms. This would mirror an incentive scheme put in place by 100% renewable electricity firm Good Energy, who featured in Blue & Green Tomorrow’s Guide to Limitless Clean Energy 2013.

However, critics have claimed that anti-wind motives were seated deep within its plans.

Onshore wind, the cheapest and most developed form of renewable energy the UK has at its disposal, is crucial in the transition to a low-carbon economy. As one commentator noted, as a result of the government’s proposals, we “have decided to make tackling climate change much more expensive.”

John Hayes, the anti-wind former energy minister who is now a senior adviser to David Cameron, told the Daily Mail, “No longer will councils and communities be bullied into accepting developments because national energy policy trumps local opinion. Meeting our energy goals is no excuse for building wind turbines in the wrong places.”

Hayes, along with a fellow anti-wind Tory MP Chris Heaton-Harris, was praised by his Conservative peers in the House of Commons on Thursday for leading the campaign against wind farms from the inside.

Unlike renewables, which are already subject to planning permission, local communities have no say in oil, gas, coal, nuclear or fracking developments. The environmental concerns regarding the latter is likely to draw significant opposition once drilling sites have been approved.

The likes of Hayes, Heaton-Harris and Bone seem to have no issue with councils and communities being bullied over these developments.

Reacting to the proposals, Andrew Pendleton, head of campaigns at campaign group Friends of the Earth, said, “Another day, another government attack on efforts to tackle climate change.

“Communities should have a say on wind farms and get direct benefits for hosting them, but rigging the planning system to allow a vocal minority to block turbines would be a disaster.”

Pendleton also called on the government to give greater power to communities on other forms of energy, such as carbon-intensive fracking for shale gas.