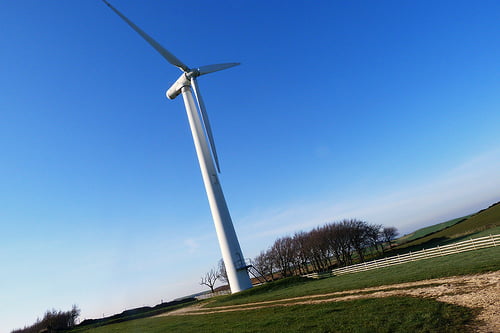 The Guardian broke the news last night that Chris Heaton-Harris, who was tasked with co-ordinating the Corby campaign, was covertly filmed saying that he had “suggested” Delingpole should stand as an independent anti-wind candidate in order to “move the agenda on”.

“Please don’t tell anybody ever”, Heaton-Harris told the undercover Greenpeace campaigner. “But he will not be putting his deposit down. He just did it because it’s a long campaign, it’s six weeks to cause some hassle and get, and get people talking.”

Delingpole, a staunch opponent of wind power and apparently a “very good friend” of Heaton-Harris, pulled out of the Corby campaign at the end of October after what he called the a “stunningly successful election campaign”. In reality, Delingpole had amassed just two votes of confidence in a pre-election poll.

On the same day, Conservative energy minister John Hayes – who in the Greenpeace video Heaton-Harris says is “on my side” – launched an unprompted attack on wind in two national newspapers.

Writing on his blog last night, Heaton-Harris said, “The quotes attributed to me range from factually correct statements to me bragging about things beyond my control, which has so often before been the failing of politicians.

“The implication that I choreographed any sort of ‘secret plan’ is simply not the case and I apologise if that is the impression given.

“It can hardly be said that my wanting to ‘put this on the agenda’ is new. I have spent years fighting on-shore wind, getting over 100 MPs to sign a letter to the prime minister, securing debates and raising questions in parliament and touring the country speaking to anti-wind groups.

“It is a subject I am passionate about and will continue to work on until communities across my constituency, Northamptonshire and the country have the protection they deserve.”

Also targeted by the Greenpeace group is Peter Lilley MP – a climate change sceptic who was recently appointed to the House of Commons energy and climate change select committee.

Lilley told the campaigner that energy minister Hayes is “prepared to duff [Lib Dem energy secretary Ed Davey] up” in order to get him on side. He added that the chancellor George Osborne “doesn’t need persuading” about wind, so pressure needs to be targeted specifically towards Davey.

Lilley also claimed that there could be “amendments to the Climate Change Act” – a legally-binding agreement to reduce 1990 greenhouse gas levels by 80% that he voted against in 2008. He suggested in the video that the act should be “advisory” instead.

When questioned by The Guardian on Telegraph blogger Delingpole’s candidacy in Corby, Heaton-Harris said, “James Delingpole was never a candidate in this by-election, there was no conspiracy or ‘conspiring with an opposition candidate’.”

Writing in the New Statesman this morning, George Eaton called for the prime minister to remove the whip from Heaton-Harris, citing the case of Nadine Dorries as a reason why action must be taken.

“If David Cameron retains any self-respect, similar action [to Dorries] must now be taken against Heaton-Harris”, Eaton wrote.

“The prime minister owes it to those who, whatever their misgivings over coalition policy, loyally support the Conservative candidate to punish those who do not. He must kill the Tories’ militant tendency at birth.”