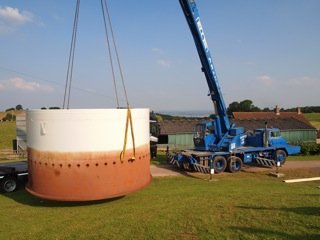 A 500 kilowatt wind installation in the Forest of Dean – the first funding project from community finance platform, Abundance Generation – has reached its £300,000 investment target, meaning work on the development is now underway.

The project has received investments of between £5 and £50,000, with investors aged from 22-80, and breaking this initial barrier in less than four weeks sets it in good stead to reach its £1.4m target by autumn this year.

Investors pledge money towards Abundance projects by buying debentures – like an IOU. Under this agreement, the energy projects are committed to paying out a regular cash sum from the profits it makes from generating and selling power.

“The £300,000 mark is significant because the project is now fully funded and construction work can proceed at full speed”, said Bruce Davis, co-founder and joint managing director of Abundance.

“The first tranche of debenture certificates have been issued. The debenture offer will remain open into the autumn or until £1.4m is reached.

“After that any remaining bridging finance will convert into debentures.

Davis added that Abundance’s model is stirring up real interest from developers across the world – further proof of its ground-breaking platform strategy.

“Using the debenture structure to create a public offer is a first for the UK and the world as a whole”, he explained.

“It’s interesting how many countries are watching to see if this is a success and whether it is something they could adopt for themselves in the future.”

Individuals investing in the Forest of Dean development should expect a return of between 6.75-8% over the course of the investment – a figure that Abundance claims will be about average for most of its projects.

The organisation has a number of further developments in the pipeline for its first year of operation, as it aims to reach £250m of investment within five years.

Louise Wilson, co-founder and joint managing director of Abundance, said, “We reached our target for the first phase of investment in the timetable we set out, despite it being a slow time of year to launch such a product.

“This shows there is a real demand for these kinds of investments; people want more control over where their money goes and how it’s being used.”

Abundance confirmed that it would soon be launching its second project, which is set to provide clean energy to 450 residential homes in the UK.

Blue & Green Tomorrow will of course keep you completely up-to-date with all future developments circulating from a firm at the forefront of UK renewable energy innovation.