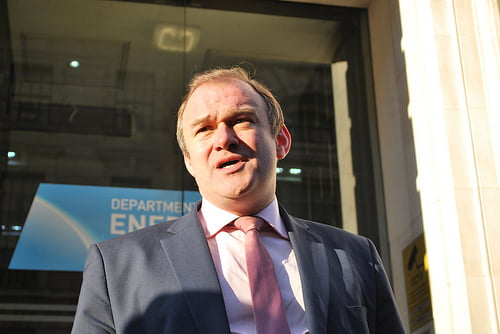 The government has decided against including a decarbonisation target in the forthcoming energy bill, delaying the decision until at least 2016.

An announcement by the Department of Energy and Climate Change (DECC) at midnight last night revealed the coalition’s plans, which it says will “deliver a clear, durable signal to investors” after months of uncertainty.

But while this might be the case, its failure to include an energy decarbonisation target has been met with derision from green groups, with some claiming that the announcement effectively ends David Cameron’s pledge to lead the “greenest government ever”.

Labour leader Ed Miliband urged the prime minister to commit to decarbonising the economy in a passionate speech in Scotland yesterday. A concrete target would see a gradual removal of fossil fuels from the UK’s energy mix between now and 2030.

Without it, oil, gas and coal will be able to continue to play a major part in power generation; potentially scuppering chances of the UK meeting legally-binding carbon reduction targets.

Energy secretary Ed Davey said that the “durable agreement” would allow companies to invest in UK energy infrastructure, which in turn would “support jobs and our economic recovery”.

He added, “The decisions we’ve reached are true to the coalition agreement, they mean we can introduce the energy bill next week and have essential electricity market reforms up and running by 2014 as planned.

“They will allow us to meet our legally binding carbon reduction and renewable energy obligations and will bring on the investment required to keep the lights on and bills affordable for consumers.”

The lack of a decarbonisation target will be seen as a win for George Osborne and the Treasury, who appear to have won a battle against the Lib Dems over the make-up of the UK’s future energy mix, certainly in the short- and medium-term.

Osborne has been vocal in his support for gas, while Ed Davey and the Lib Dems have long supported increased investment in renewable energy.

“The coalition has caved in to Osborne’s reckless dash for gas and banged the final nail in the coffin of Cameron’s pledge to lead the greenest government ever”, said Friends of the Earth’s executive director Andy Atkins in response to the deal.

“But the fight is far from over – there’s huge public and business support for power sector decarbonisation. Politicians from all parties must fight in parliament against Osborne’s fossil-fuel addiction.”

The Committee on Climate Change (CCC) – the government’s official climate advisers – recently wrote a letter to Davey saying that a dash for gas could actually be illegal.

Furthermore, in December last year, the CCC revealed that gas was the primary driver behind increased consumer energy bills, and not renewables. But under the government’s levy control framework, spending for low-carbon electricity is set to more than triple between now and 2020, with around £110 expected to be added to household bills by then.

Putting that figure into context, every household already subsidises fossil fuels by £138 and renewables by only £53, according to figures based on 26.3 million UK households from the Organisation for Economic Co-operation and Development (OECD).

This means that for every pound of renewable subsidy, fossil fuels receive £2.60. Whereas renewable energy can deliver stable prices, fossil fuels cannot. The risk of commodity price instability driven by oil scarcity and the increasing effects of carbon intensive energy supply, may make that £110 seem a small price to pay.

The narrow discussion of direct subsidy of fuel types ignores the heavy indirect costs of air pollution. The health costs could be £323 per household at its lowest estimate and £760 at its highest. This is a fossil fuel subsidy by any other name.

Meanwhile, nuclear waste storage is costing each household at least £100 and rising.

In eight years’ time, the subsidy for renewable energy, guaranteeing a limitless, clean and domestic supply of energy, will seem small in comparison.

Click here to read the industry reaction to the announcement.