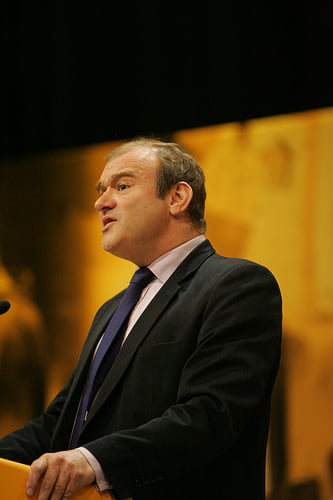 Ed Davey has issued a rallying cry for politicians, scientists and society to work together in coming up with solutions to fight climate change, calling those who reject the science “dogmatic and blinkered”.

Speaking yesterday at a Royal Society symposium, the energy secretary said, “The basic physics of climate change is irrefutable. Greenhouse gases warm the atmosphere and cause changes to the climate. Human activity is significantly contributing to the warming of our planet.”

He went on to say that all aspects of industry and policymaking must combine in order to come with effective strategies to limit the worst effects, in what was one of the most vigorous speeches on the subject for years.

His speech concluded with a reference to a USA Today cartoon, in which a man is laying out the positives of a sustainable world – including liveable cities, renewable energy, green jobs and so on – and another man asks, “What if [climate change] is a big hoax and we create a better world for nothing?”

Davey said, “In reality, those who deny climate change and demand a halt to emissions reduction and mitigation work, want us to take a huge gamble with the future of every human being on the planet, every future human being, our children and grandchildren, and every other living species.

“We will not take that risk.”

The energy secretary opted to omit the fact that the government’s energy bill failed to include a 2030 decarbonisation target – which is seen as crucial in sufficiently lowering the UK’s carbon emissions.