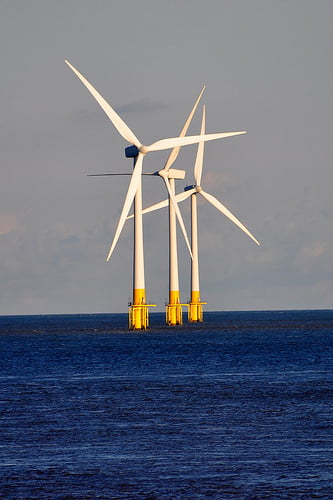 Today, the government published the banding review for the Renewables Obligation. It says the UK’s economy will get a £20-25 billion boost because of it.

Here’s a selection of the best reactions to the news from some of the leading figures in the shift towards a green economy.

“The announcement provides some much needed clarity around the rates, but few can deny that what we’ve gone through to reach this point has been troubling.

“The key principle that’s been at stake is whether the government is committed to an independent, evidence-based process for setting support levels for renewables and whether that process is able to withstand political meddling.

“Whilst question marks do remain for some technologies, today’s announcement shows that that is the case.

Ed Davey has won the battle over wind subsidies – but at what price? – Andrew Pendleton, Friends of the Earth

“The integrity of the rate review has been maintained and it will be used to inform any outstanding decisions. That’s crucial for maintaining investor confidence.

“Perhaps most important for us is that, as the UK’s leading 100% renewable electricity supplier,  our existing capacity to generate clean, renewable power remains untouched.”

“Government has re-affirmed its commitment to the renewables industry, but we are concerned about the further reviews facing many technologies, which is likely to inhibit investment.

“Business confidence is essential to realise the vast potential of this industry, in which the UK still lags behind the rest of the world.

“Companies will not invest without stable government policy delivered in a timely manner.

“At such a critical time for the economy, this country cannot afford any further political wrangling that puts at risk future investment and job creation.

“The chancellor’s recent letter to the energy secretary showed a serious misalignment between the attitude of Treasury and other government departments charged with delivering a growing, low-carbon economy.

“The Treasury appears to be frustrating the creation of a comprehensive energy policy for short-term economic and political gain. It is time energy policy properly reflected the long-term interests of the nation.”

John Cridland, director-general of the Confederation of British Industry.

“The level of support the government has agreed for onshore wind will help to encourage investment into our energy sector, creating jobs and supporting growth.

“Companies must be able to invest with confidence so that we can have secure, affordable and low-carbon electricity in the decades to come.

“The government is right that gas should play a crucial role in any future energy mix.

“We have argued that there is no need for a false choice between renewables, nuclear, gas, and carbon capture and storage. It’s clear from the evidence that we need a diverse supply.”

Companies will not invest without stable government policy delivered in a timely manner – Martin Wright, REA

“DECC’s banding announcement is great news for the sector and will bring some short-term relief for the industry as a whole.

“DECC’s on-going consultation on this matter should not only confirm that this is a significant challenge but also identify the need for a continued obligation on UK suppliers to purchase ‘green’ under the proposed Contracts for Difference/Electricity Market Reform environment.

“For onshore wind especially, the 0.9 ROC decision is a critical milestone and will give the industry some comfort over the government’s commitment to the sector.

Few can deny that what we’ve gone through to reach this point has been troubling – Juliet Davenport, Good Energy

“Nevertheless, the affordability and value for money debate that took place in recent months is not about to go away and will already be on the agenda for the next review in 2014.

“With an oversupply in the wind turbine market, we would expect costs to reduce and the sector to be gradually wound-down off subsidies in the medium term. Onshore wind may slowly be entering the brave new world of mainstream market economics.”

Andrew Pendleton, head of campaigns at Friends of the Earth.

“Ed Davey has won the battle over wind subsidies – but at what price?

“Treasury arm-twisting has forced him to give his backing to new gas-fired power stations – which is completely at odds with his fuzzy rhetoric on clean British energy.

“The government’s climate advisors warn that UK climate targets won’t be met unless our electricity system is almost entirely decarbonised by 2030 – Ed Davey must insist that this target is included in the Energy Bill when it enters parliament later this year.

“George Osborne’s plans for more gas-fired power stations would be a costly disaster for households, businesses and the environment – it’s time for David Cameron, the self-styled leader of the greenest government ever, to intervene.”