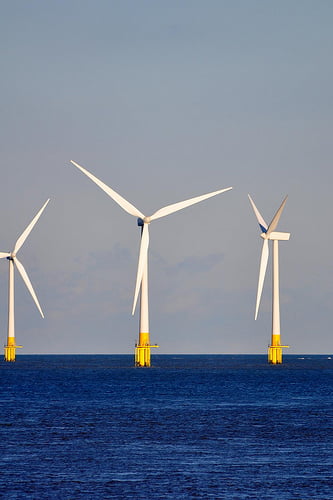 Renewable energy capacity in the UK has increased by 42% in a year, according to figures released by the Department of Energy and Climate Change (DECC).

In total, DECC says there is now 14.2 gigawatts (GW) of renewable capacity installed across the country – compared to 10GW in September 2011.

Its share of the UK’s electricity generation has gone up too, with now 9.6% now coming from clean energy, as opposed to 9% a year earlier – a 6.5% rise. This has been aided by the offshore wind sector’s exponential growth, which experienced a 46.7% boost in the same period.

Overall in the second quarter of 2012, 8.13 terawatt hours (TWh) of renewable electricity was generated – a 6.5% rise year-on-year. Offshore wind contributed to 1.6TWh of this amount.

A disappointing performer in the renewables camp appeared to be hydroelectricity, which has produced 31.3% less power since a year earlier. Onshore wind experienced an 11.4% drop, but solar PV, wave and tidal combined accounted for an encouraging 861% boost.

Meanwhile, DECC’s figures also show that the share of gas in the UK’s electricity mix has been severely cut in the last 12 months, from 43.7% to 29.8%. However, this void has been replaced by coal’s 59.9% increase – which is now the primary source of electricity for the UK.

A 3.3% fall in nuclear generation means that the total electricity produced from low-carbon sources (nuclear and renewables combined) remains the same – 31.6% – over last year.

The renewables statistics released by DECC prove that investors and developers are continuing to financially back clean energy projects in the UK, despite the uncertain noises coming out of the government.