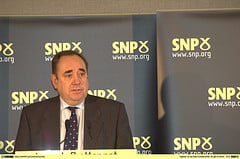 Scottish First Minister, Alex Salmond, has claimed he could set aside £1 billion a year in oil and gas revenues over the next twenty years in an independent Scotland, despite sharp criticism from leading economists.

Scottish First Minister, Alex Salmond, has claimed he could set aside £1 billion a year in oil and gas revenues over the next twenty years in an independent Scotland, despite sharp criticism from leading economists.

In a speech at the London School of Economics on Wednesday, Feb 15, Mr Salmond argued that the new investment vessel could yield £30 billion worth of oil revenue savings for Scotland by 2035.

The model mimics Norway’s Government Pension Fund Global –a fund devised in 1990 as a fiscal policy tool to buttress long term savings from the country’s extensive oil revenue. It is now worth £330 billion.

Salmond highlighted the economic use of an oil and gas fund for Scotland by saying, “Revenues could be invested, rather than spent on current expenditure, during good financial times, and could counteract the effects of economic downturns.”

In an independent Scotland, establishing an oil fund would, as contradictory as it may sound,  work alongside the SNP’s drive to make renewable energy central to ‘re-industrialisation’ and meet its current target of generating 100% gross annual electricity consumption from renewable energy by 2020.

Indeed, establishing a re-industrialised green economy was highlighted by Salmond as one of the country’s six practical ways to boost economic growth and jobs through independence, while alleviating future dependency on oil.

A sovereign wealth fund backed by oil cash savings would buffer Scotland against future economic storms, giving a future sustainable economy added financial stability. So, when the oil runs out, Scotland’s future generations could reap the reward from a large sovereign wealth fund while profiting from a clean energy export economy.

Citing research from the think-tank Reform Scotland, Salmond summarised the idea by saying, “Reform Scotland estimates that as a result of our renewable electricity target, Scotland would export half the electricity generated by 2020, increasing Scottish exports by £2 billion a year – equivalent to around 17% of Scottish manufacturing exports to the rest of the UK.

“And while renewables will be the source of Scotland’s re-industrialisation, in value terms there is at least as much oil and gas still to come out as has already been used – at least 40 years of oil and gas reserves. We still have an opportunity to establish an energy fund.”

But the plan to establish an oil and gas fund has its critics.

Economic analysts argue that the country would either need oil tax revenues to pay for schools, hospitals and public services, or help towards the burden share of UK national debt accumulated by Scotland post secession.

Professor John McLaren, from Glasgow University’s Centre for Public Policy and the Regions (CPPR), said, “The country has a £20 billion deficit without oil. Why would you set up an oil fund when you are massively in debt?”

Political opponents to Salmond’s claims include Labour finance spokesman Ken Macintosh, who said, “Basing our entire economy on a single commodity that is volatile in price and finite in supply is a step backwards for Scotland.”

If the fund was established, the SNP leader may need to clarify the cuts he would need to make elsewhere to combat the budget deficit. But Mr Macintosh overlooks the point that the economy would not be based solely on this “single commodity”.

The SNP has repeatedly made clear their ambition to meet future climate change targets and has emphasised that, through independence, they would have more control over Scotland’s renewable energy resources and more borrowing power to stimulate capital investment in to the green energy sector.

The oil fund would be an economically viable option given that Scotland still possesses an abundance of oil and gas reserves – but it would only work alongside a re-industrialised green economy.

As Salmond makes clear, Scotland is currently a frontrunner in the shift away from fossil-fuel consumption towards a green energy economy, stating, “We have 25% of Europe’s tidal power potential, 25% of its offshore wind potential and 10% of its wave power potential – not bad for a nation with less than 1% of Europe’s population.”

With this resource capacity, there is big appetite for funding growth and creating jobs in the marine and offshore wind sectors.

Blue & Green Tomorrow has previously identified some of the ways in which this appetite is being fed. Marine energy funds like WATERS 2 have boosted Scotland’s renewables revolution through financing research and development to further develop testing of new wave and tidal prototypes in the seas around Scotland.

And from the jobs perspective, government-led initiatives like the Low Carbon Skills Fund have been supporting the sustainable growth of Scotland’s low-carbon businesses by up-skilling and re-skilling employees to make clean energy production more cost-effective.

Under independence, the SNP could use some of the savings in an established oil and gas fund to further invest in research and development that would improve the cost-effectiveness of technologies used in those critical industries.

In a speech peppered with refrains that independence was paramount to sustainable economic opportunity, an oil fund might seem like a strange suggestion – but perhaps if some critics looked at how it would fit in alongside and ultimately help finance a re-industrialised low carbon economy – then it can be viewed in a much better light.