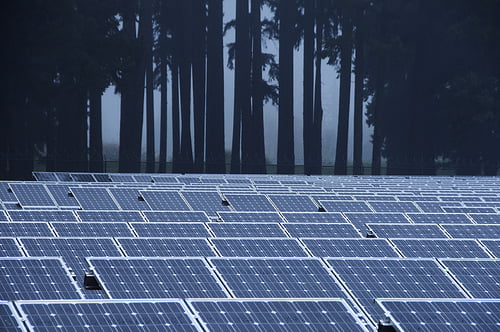 One of the UK’s biggest solar power farms could be built in Suffolk, after a green energy company revealed plans for a 25 megawatt (MW) park to be built in the county.

The proposal for the farm, which would be located in Hacheston, a village just over 15 miles north-east of Ipswich, has been tabled by Hampshire-based developers, Hive Energy.

“The idea of renewable development takes a bit of getting used to but needs to be done – the country needs the energy”, Hive Energy CEO, Giles Redpath, told the East Anglian Daily Times.

“There is a perception that this country is not sunny enough but the fact is that solar panels harness light and can still perform at 70% potential on a cloudy day.

“Being close to the sea, Suffolk has particularly good light and a lot of cooling wind, so the panels can perform better. There is already a very good substation in place which can be used for renewable energy.

Rebuffing any potential objections from locals on environmental impact grounds, Redpath added that the land on which the solar park would be built is no longer used for farming, and that Hive Energy would be planting a wildflower meadow around the area.

The current possessor of the ‘UK’s largest solar farm’ title is a somewhat contentious issue. Different reports attribute the award to developments in Cornwall, Leicestershire and Wiltshire.

Nevertheless, regardless of whether it tops the table in terms of size, the Hacheston farm’s impact – both economically and environmentally, on a local and national scale – means that it will be up there with some of the UK’s most valuable renewable energy projects.

The development will hopefully set the UK on a large-scale solar surge, but there is still some way to go to catch up with solar developments currently taking place on the other side of the Atlantic.

Earlier this month, Blue & Green Tomorrow reported on the Topaz Solar Farm in California, which dwarfs the Suffolk project by some way, with a potential capacity of 550MW of energy.

However, America’s vast open plains and often untouched desert-covered land means it is much easier, and indeed a much more realistic concept, to build massive solar farms of this size – more so than in the UK, which is often limited by its geography and relatively tightknit settlements.

As with every renewable energy development, it’s encouraging to see an increasing number of communities and companies opting for clean power.

The sooner the Government realises and acts upon the fact that 85% of its people are in favour of renewable energy, the sooner we can become a real innovator in the space – something that in our search for a sustainable future, is absolutely vital.