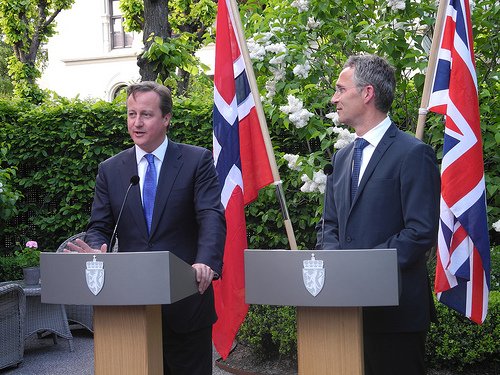 David Cameron and the Norwegian Prime Minister, Jens Stoltenberg, have agreed for the UK and Norway to form a partnership that would see the two share energy resources.

The collaboration, according to the Department of Energy and Climate Change, is “designed to secure affordable and sustainable long-term energy supplies” for the two countries.

Renewable energy investment and climate change policy development are just two of the areas that the head of states have agreed to work together on. Thousands of jobs could also be created after billions of pounds of new investment were announced by companies from each place.

Speaking yesterday at a meeting attended by ten energy companies that are at the forefront of the UK and Norwegian markets, Cameron said, “The jobs and investments announced today highlight how vital the strong relationship between Norway and the United Kingdom is for our energy security and economic growth.

Plans for an interconnector project that would link the UK and Norway’s electricity grid were also discussed. If undertaken, it would be the world’s longest underwater power link.

Steve Holliday, chief executive of National Grid, said, “Jointly we are looking to invest more than £1 billion on what would be the first link between UK and Norway.

“Using state of the art technology, the interconnector will give the UK the fast response we will need to help support the management of intermittent wind energy with clean hydro power from Norway.

“It would also enable us to export renewable energy when we are in surplus.”

A recent Blue & Green Tomorrow infographic showed that the energy mix of the UK and Norway are very different.

In 2009, renewable energy barely made up 5% of the UK’s energy mix. And although its contribution has risen since (to around 8% now), it still has a long way to go to match Norway, whose renewables accounted for nearly 50% of the country’s energy three years ago.

Norway’s Scandinavian cousin – Denmark – is also famed for its work in clean power. Last month, the UK announced it was looking into the possibility of a power cable running between the two countries so that the pair could share renewable energy.

With similarly abundant backyards, the UK can learn a lot from Scandinavia’s backing of clean energy. Knowledge and resource partnerships like the ones set up with Norway and Denmark are essential if we are to become a leader in renewables.

Climate change is a global problem. It’s therefore important to tackle it as one.