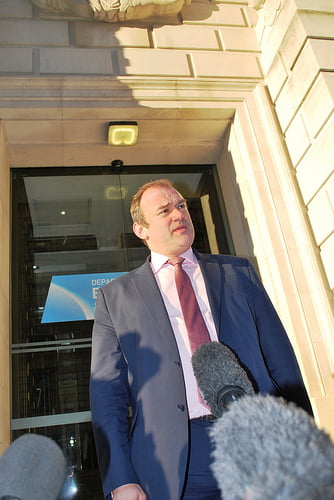 The government has published its much-anticipated plans for renewable energy subsidies. It claims the new banding for the Renewables Obligation (RO) will “support jobs and deliver more clean power with a reduction in costs to consumers between 2013 and 2015”.

The Department of Energy and Climate Change’s (DECC) review of clean energy subsidies is proof of the Lib Dems standing firm against Conservative challenges to increase the level of cuts. The agreed banding will, according to DECC, bring £20-25 billion of green investment into the UK economy.

Energy secretary Ed Davey had previously received a letter from George Osborne, republished here in the Guardian, in which the chancellor requested a greater emphasis on gas in Britain’s energy mix, echoing the sentiments laid out in his unsustainable and not-so-green budget in March.

But Davey it seems has resisted these calls, instead opting to more-or-less stick with the originally agreed plans.

“Renewable energy will create a multi-billion pound boom for the British economy, driving growth and supporting jobs across the country”, he said.

“The support we’re setting out today will unlock investment decisions, help ensure that rapid growth in renewable energy continues and shows the key role of renewables for our energy security.

“Because value for money is vital, we will bring forward more renewable electricity while reducing the impact on consumer bills between 2013 and 2015, saving £6 off household energy bills next year and £5 the year after.”

The so-called “greenest government ever” received warranted flak recently after it was revealed that ministers within the Treasury have met with fossil fuel-driven energy suppliers seven times more than firms in the green sector.

Indeed, Osborne has never met a single member of the clean energy side since the coalition came into power in 2010.

This prompted Tim Yeo MP, chairman of the Energy and Climate Change Committee, to seriously question Osborne’s leadership of the Treasury.

He told the Guardian, “The Treasury has never been signed up to the green agenda, but this has got much more serious in the past year.

“Their interventions on the energy bill, and clear interference over [renewable energy subsidies] RO certificates have shown this – it all adds up to a clear sign that they are not supportive of progress on the low-carbon energy sector.”

DECC’s banding review declares that onshore wind support will be decreased by 10%, subsidies for offshore wind will reduce in line with the cost of the technology falling and marine energy support will increase by 150%. Large-scale solar projects will not experience an immediate reduction.

Juliet Davenport, CEO and founder of Good Energy, the UK’s leading 100% renewable electricity supplier, said, “The announcement provides some much needed clarity around the rates, but few can deny that what we’ve gone through to reach this point has been troubling.

“The key principle that’s been at stake is whether the government is committed to an independent, evidence-based process for setting support levels for renewables and whether that process is able to withstand political meddling.

“Whilst question marks do remain for some technologies, today’s announcement shows that that is the case.

“The integrity of the rate review has been maintained and it will be used to inform any outstanding decisions. That’s crucial for maintaining investor confidence.”

Investment in renewable technologies ought to remain a primary objective if the government wish to have a sustainable economy in the future. We interviewed energy minister Charles Hendry for our recent Guide to Limitless Clean Energy, and he said the government was “very committed to seeing a major rollout of low-carbon electricity” and that clean energy was a “key part of that”.

Check back later for industry reaction to the RO banding review.