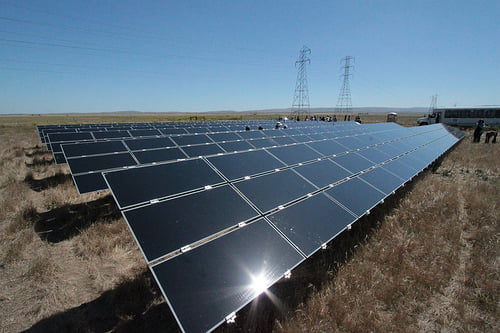 A 400-strong workforce will be employed during the three-year construction period, and its owners expect that once completed, the Topaz Solar Farm located in San Luis Obispo County, will be the largest of its kind on the planet.

Construction work initially began in November, with the two firms drafting in construction equipment, building roads, installing fences and providing its workers with the relevant training.

Boardroom representatives from MidAmerican Solar and First Solar visited the site last week, and held a celebration of sorts signify the assembly stage of the Topaz Solar Farm.

“The Topaz project will benefit the environment and the local economy“, said Paul Caudill, president of MidAmerican Solar.

“A project of this size creates jobs and plays a major role in our nation’s long-term electric energy supply.”

The Topaz project is expected to generate nearly $417 million, but the predominant plus point emerging from the project is undoubtedly its overwhelming impact on California’s renewable energy industry, and of course, the state’s renewables target, which is currently set at a 33% contribution by 2020.

And it’s not as if the development is short of high-profile backers, either.

In December last year, Buffett’s firm bought the $2 billion Topaz Solar Farm project from First Solar, which will still be constructing and operating the site, with completion expected by 2015. Pacific Gas and Electric Company, the energy supplier to most of California, has signed a 25-year electricity purchase agreement with the two solar organisations leading the project.

It seems then that the Golden State of California, so-called for the discovery of gold in the region in 1848, has struck a new kind of treasure with the Topaz project—one that has the potential to revolutionise its energy market.

But the Topaz project isn’t the only large-scale solar development appearing on the global network. The Indian state of Gujarat has 600MW of solar projects in the pipeline, and recently switched on the panels at the 3,000 acre Gujarat Solar Park, which became Asia’s largest solar development overnight with a 214MW contribution.

A recent photo in The Guardian shows the awe-inspiring scale of the development.

In the UK, commercial solar panel installation is becoming an increasingly attractive investment, proven by a recent B&GT infographic that showed UK renewable generation from 2010 to 2011.

But at an individual level, the uncertainty surrounding the UK’s feed-in tariff scheme—the subsidies for installing panels in your home—has left many people disillusioned and confused.

However, solar panel owner Gavin Smith recently wrote a piece for us on his experiences with the sector, and it’s not all as gloomy as it looks.

Our in-depth report, The Rise of Renewable Energy, is the ideal guidebook for budding solar advocates and seasoned renewable generators alike. Read it and be inspired to join the clean power revolution.