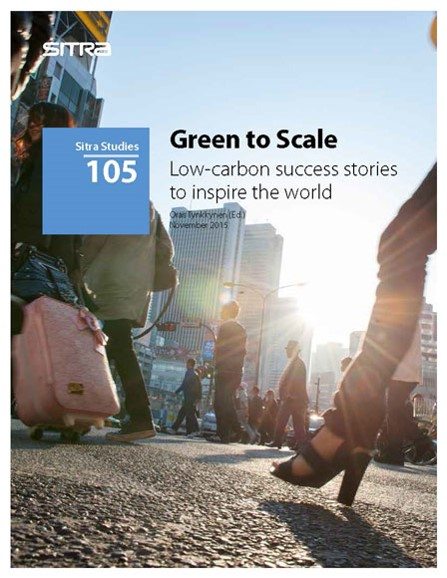 A new report by European think-tank Sitra, supported by a group of 11 world-leading institutions , has found that the world could cut annual greenhouse gas emissions by about 12 gigatonnes in 2030, using only established and proven climate solutions. No new inventions are required, nor vast amounts of capital.

The Sitra report, Green to Scale, took 17 climate solutions that have already proven successful in 36 countries, and asked what would happen if these were scaled up internationally, using realistic projections through 2030. The findings indicate that that the solutions could go a long way towards closing the “emissions gap”, the extra emissions reductions required to limit global average warming to less than 2 degrees Celsius, as calculated by the United Nations Environment Programme (UNEP).

12 gigatonnes is a quarter of today’s global annual greenhouse gas emissions and up to three times the reductions that governments have pledged ahead of the UNFCCC climate summit starting in Paris on Monday 30th November. It is also equivalent to the combined annual greenhouse gas emissions of the USA and European Union, or the combined energy-related carbon dioxide emissions of China and India.

Andrew Steer, President and CEO, World Resources Institute (WRI), said: “The Sitra report presents smart, common sense actions that countries can take to close the “emissions gap” while promoting strong economic growth. Taken together these solutions would more than double the emissions reductions in 2030 beyond what will be achieved through the announced national climate plans. Building on the wave of climate commitments ahead of Paris, this report offers proven steps to speed the transition to a robust, low-carbon global economy.”

The 17 solutions in the report fall under five categories: renewable energy, industry, transport, buildings and households, and forests and agriculture. Those that could reduce the most emissions are as grid-connected solar (based on success in Germany), reduced deforestation (Brazil), wind power (Denmark), improved cook stoves (China), and reforestation and afforestation (Costa Rica).

The most effective of the 17 solutions at scale, the report found, were also the most expensive for consumers and taxpayers. However, the costs can be partly off-set by in particular efficiency measures that deliver reduced energy bills. The aggregate annual cost of deploying all 17 solutions globally ranges from a maximum of $94 billion a year in 2030, to net savings of $171 billion per year. For comparison, $94 billion is comparable to the $100 billion in annual commitments to help developing countries fight climate change, or eight days of global annual spending on fossil fuel subsidies.

Mikko Kosonen, President of Sitra, said: “We already have climate solutions that are proven to work at the level of nations. How far can we go if we take these to a global scale? The Sitra report shows that these off-the-shelf solutions can make a big contribution to closing the emissions gap, without breaking the bank, and with no need for out-of-this-world inventions.”

The 5 climate solutions shown to deliver the greatest cost savings were as follows:

Sitra and its partners will brief government officials on the results of the report at locations around the world in the coming months, starting today in Washington, D.C. followed by Rio de Janeiro on November 25. The Sitra report can be downloaded here. The underlying technical report, developed by Ecofys, can be downloaded from here.