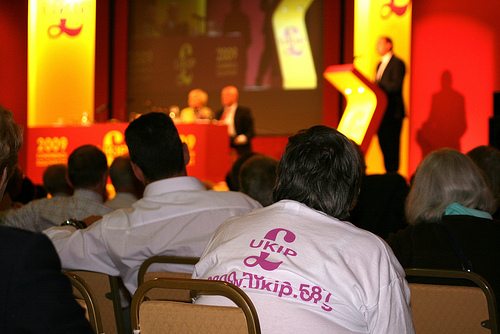 The UKIP MEP who called for the teaching of climate change to be banned in schools has asked to be shown evidence that “proves beyond doubt” that carbon dioxide (CO2) emissions cause global warming. Here, two climate academics duly oblige.

Earlier this month, UKIP’s education spokesman Derek Clark MEP said he would want to ban teaching climate change in schools if his party won the general election in May 2015.

He added there would not be “much opposition” within the party, saying Al Gore’s critically acclaimed documentary film An Inconvenient Truth in particular would be prevented from being shown.

Clark’s comments were roundly criticised (Nick Eyre of the UK Energy Research Centre described them as “anti-scientific nonsense” to the Ecologist) but they appeared under the radar in many respects. Just two days after the MEP had spoken to Index on Censorship to air his views, another UKIP member – the now-suspended Henley-on-Thames councillor David Silvester – made headlines when he linked the legalisation of gay marriage with the recent spate of flooding in the UK.

In addition, UKIP’s climate sceptic stance is well-known. The party’s 2014 energy policy document says climate change “is so last century”, claiming that there are increasing doubts about the theory of manmade climate change. This is despite the world’s leading climate scientists saying they are 95% sure this is the case in the Intergovernmental Panel on Climate Change’s (IPCC) latest review of the physical science. Just one scientific paper out of the 2,258 published on the subject in 2013 disagreed with this consensus.

If the party were to win the general election, UKIP also pledges to “scrap all green taxes and wind turbine subsidies”, develop nuclear power stations and encourage the shale gas industry.

After we reported on his comments on banning climate change from schools, Clark wrote a follow-up letter, sent to Blue & Green Tomorrow and others, that he requested be published.

The full letter reads as follows:

My comments about not teaching the theory that global warming is caused by carbon dioxide emissions has received adverse comment. Some people have said that since I’m a science teacher I should know better.

That is the whole point. I spent my life guiding youngsters in performing laboratory experiments and sometimes demonstrating an experiment myself so that the results gave a proven explanation of the topic in question. There is no other way to turn a theory into fact.

So can somebody please send me the results of actual experiments conducted under controlled conditions which prove beyond doubt that carbon dioxide in the atmosphere causes global warming. I repeat, experimental results, not computer predictions or circumstantial evidence, but hard solid results of actual objective research.

Until we have that to teach an unproven theory will be detrimental to pupils of all ages. It is indeed the truth which I seek.

We put Clark’s request to some climate change academics, who named numerous studies that they say meet the UKIP MEP’s requirements.

Prof Myles Allen, leader of ECI Climate Research Programme at the University of Oxford and an author with the IPCC

Thanks to a remarkable observation made by NASA flying the infrared interferometric spectrometer (IRIS) instrument on the Nimbus 4 spacecraft in the early 1970s, we do have direct observations of the impact of rising CO2 levels on the planetary energy budget over recent decades.

This is documented in a very nice paper by John Harries and co-workers. What Harries et al show is that, by comparing spectra of outgoing infrared energy as measured by the IRIS instrument with those of a similar instrument flown by the Japanese in 1997, you can literally see the impact of rising CO2, methane and [chlorofluorocarbon] levels on the global energy budget.

In the language of a science teacher, if you switch on the bunsen burner, the first thing that happens is the beaker warms up. More complicated things can happen next, like melting ice, boiling the water, cracking the glass and so on, so predicting exactly how much warming increasing carbon dioxide will cause is more difficult. But the IRIS data provide direct evidence that carbon dioxide is causing global warming.

Bob Ward, policy and communications director at the Grantham Research Institute at the London School of Economics

I’m afraid that Mr Clark gets an F as his knowledge of atmospheric physics appears to be a few hundred years out of date.

It is nearly 200 years since Joseph Fourier first pointed out that the Earth is warmer than it otherwise should be based on its distance from the sun, and speculated that the atmosphere may be responsible. It is more than 150 years since John Tyndall showed in laboratory experiments that carbon dioxide and water vapour are greenhouse gases. It is over 100 years since Svante Arrhenius published a paper containing the first estimates of how much the Earth’s climate might warm by burning all of the Earth’s known reserves of coal and releasing the carbon dioxide into the atmosphere.

I suggest that Mr Clark takes a remedial course in atmospheric physics before he makes any further pronouncements on this subject. Or he could read this history of climate change science on the website of the American Institute of Physics.