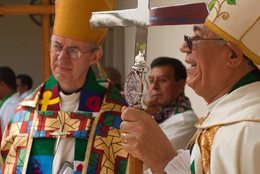 The archbishop of Canterbury has called on energy firms to assess their “social obligations” amid political battles over energy price hikes.

Justin Welby sympathised with consumers in an interview with the Mail on Sunday, saying that rising costs of energy will have a “severe” impact on those on low incomes.

His comments come just days after it was announced that energy giants British Gas and SSE would be increasing their prices by 9.2% and 8.2% respectively.

Welby said, “The impact on people, particularly on low incomes, is going to be really severe in this, and the companies have to justify fully what they are doing.”

He added, “I do understand when people feel that this is inexplicable, and I can understand people being angry about it, because having spent years on a low income as a clergyman I know what it is like when your household budget is blown apart by a significant extra fuel bill and your anxiety levels become very high. That is the reality of it.”

Welby also said that energy companies should “behave with generosity and not merely to maximise opportunity”.

According to energy firms, the price increases come as a result of an increase in the wholesale price of energy and so called “green taxes”.

However, Reg Platt, senior research fellow at the thinktank IPPR said the increase is due to poor delivery of government schemes on the part of energy companies.

Both SSE and British Gas are currently under investigation by energy watchdog Ofgem for failing to deliver the government’s energy efficiency policies.