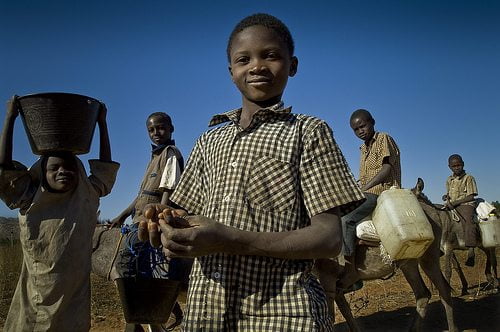 Investors are rushing to Africa, as the continent seeks to capitalise on its vast clean energy resources. Chris Loker writes how people can help decide the fate of the planet and its inhabitants by investing wisely today.

“The trend is your friend” in finance and the money-men seem to have noticed the trend of climate change. UBS, Deutsche Bank, Goldman Sachs and Nedbank locally are targeting alternative energy and discussing the consequences of a carbon asset bubble.

The overwhelming majority of scientists say the Earth is warming, humans have caused it and the consequences may be catastrophic if it continues unabated. As President Obama said recently, this is no time for a meeting of the Flat Earth Society.

September 2013 was the 343rd consecutive month of above average global temperatures and we have already breached the 400 parts per million (ppm) carbon limit that we were warned about. This must shift the focus in capital markets from short-term gains toward long-term consequences and give rise to the mother of all asset bubbles for carbon producing industries.

The Carbon Tracker Initiative estimates that between 50-80% of known coal/oil/fossil fuels should be left unused to prevent temperature rises over 2C, which the International Panel on Climate Change suggests is prudent.

The impact on business valuations is enormous, even before another UNEP sponsored report’s assertion that none of the top 20 industrial regions/sectors would be profitable if environmental costs were accounted for. The report puts the unpriced natural capital cost at $7.3 trillion per annum, 10% of global GDP, a cost not presently accounted for and the biggest culprit is coal power production.

These challenges represent a massive opportunity if the flow of money can be altered.

Traditionally, investment houses allocate capital based on returns and do not account for the positive and negative externalities created by the businesses employing this capital. In the last few decades, therefore, many financial institutions have tended to focus mainly on the demands of shareholders, to the detriment of other stakeholders, such as local communities, employees and the environment. Often projects with negative social and/or environmental impacts have received capital, while projects offering measurable benefits to society have not been allocated much-needed capital.

Chasing yield in the short-term has often been detrimental to shareholders in the long run anyway. Even though the local banking industry dodged the sub-prime bullet, it is no stranger to asset bubbles, funding microlending, dotcom, contracts for difference, unsecured lending, property and other sectors with negative consequences.

This, at the same time that social enterprises targeting sustainability outcomes as well as profit, are battling to raise capital due to perceived higher risk. But ‘sustainability’ has evolved from a social movement into a market opportunity through the growth of new market options that are healthier, cleaner and more efficient. This is broader than environmentalism, encompassing social justice and economic prosperity.

South Africa (correctly) trumpets the 50 billion rand invested in the first round of the Independent Power Producer’s programme aimed at delivering 20% of electricity from alternative sources by 2030, but this needs to be compared with the 300 billion rand being spent on coal-fired power plants. This, at a time when both the US government and the World Bank are significantly cutting financing for coal.

We need to ask, what is the true cost of carbon producing power (including externalities) and what happens when the carbon tax is introduced in 2015? This as the cost of alternative energy plummets. Compare this to California where all new power generation will come from renewables this year and Germany where 50% of power was delivered by renewables at a point and perhaps we are thinking too small.

Jason Drew, one of rising breed of local ‘ecopreneurs’, talks often of Africa’s potential to leapfrog the developed world by investing in future-proof technology rather than trying to ‘catch up’. In the same way that the continent skipped landline telephony and went straight to mobile (there are an estimated 700m cell phones in Africa), we have an opportunity to take a leadership position with farsightedness, and at the same time, “repair the future”.

President Obama reinforced this notion for the continent during his recent visit. After all, the solar energy alone hitting Earth in a year is 20,000 times more than what the whole of humanity consumes annually, and South Africa is the third best solar location in the world with one of the highest and most stable solar radiations.

Investors are rushing to Africa, lured by new markets and consumers, resources, growth and infrastructure opportunities – at this inflection point we can choose our future by investing wisely today. Will it be in coal, mining, arms, oil, nuclear, chemicals, casinos, consumptive manufacturing or in organic farming, renewables, entrepreneurs, energy efficiency, water and affordable housing?

Money is finite and on the cusp of a post-carbon revolution that could be as big as the fossil-fuel-fueled Industrial Revolution, with an underdeveloped infrastructure, there would be significant advantage to investing in job-intensive, clean technology that enhances food and water security as well as advancing health benefits. In the future, water, food, conservation and renewable energy could be worth more than diamonds, gold and coal.

Sustainability is a megatrend that can deliver long-term competitiveness through better management of risk and incorporating the broadest notion of stakeholders and it’s not a fad because:

– The climate crisis is real

– The energy crisis is permanent

– New technology is changing the game

– Investors are starting to care

– Inequality/poverty/unemployment need to be addressed

But this is changing and so it should; sustainable finance makes sense for individuals, communities, the country, continent and the planet. It also makes financial sense – even the money-men are starting to see that, and why shouldn’t money be a force for good?

Chris Loker is a financial services strategy consultant and founder of a sustainable finance company. He tweets at @waterfinancial.