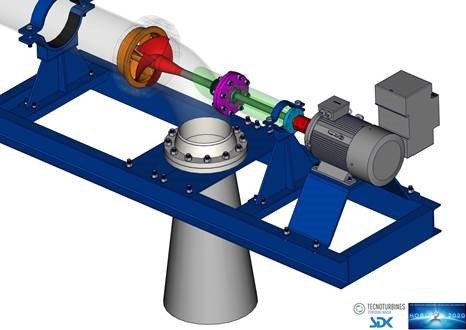 Backing For Tecnoturbines From European Commission

A project headed up by Tecnoturbines, a company based in Catalonia, specialising in the development of hydraulic turbines, has received a grant of EUR 1 million from the European Commission. This has been awarded as part of the Horizon 2020 (H2020) programme, a European initiative aimed at promoting innovation and sustainability.

Having successfully come through the selection process in phase 2 of the most recent H2020 call for proposals for SMEs, the consortium formed by Tecnoturbines and the Madrid-based engineering firm Sendekia, has received a capital grant of EUR 1 million to create and launch a new turbine on the market which will make it possible to generate up to 35% more electrical energy than traditional turbines.

Jaime Lledó, founder of Tecnoturbines. “Our proposal involves developing a turbine that produces electricity in variable hydraulic conditions in terms of flow and pressure, which is a very common scenario due to the seasonal nature of the water resources available. Just 6% of the applications submitted have been awarded a grant, which endorses the viability and potential of our project.”

Thanks to the H2020 contribution, the Tecnoturbines and Sendekia project has a total budget of EUR 1.5 million. Technoturbines has a 60% stake, and will be coordinating the project.

Tecnoturbines has two main shareholders: Fluidra Accelera, the acceleration programme for start-ups from the multinational Fluidra group, specialising in the development of applications promoting the sustainable use of water and KIC InnoEnergy, the innovation engine for Europe’s energy industry. In addition, the company F-Iniciativas acted as a mediator in submitting the proposal to the Commission.

The H2020 campaign, launched in 2014 involves a major programme aimed at promoting research and innovation at the European level. By 2020, the European Commission will have awarded around EUR 80,000 million to R+D+I initiatives. Furthermore, support from the Commission is expected to encourage private investors to fund the ideas which were successful, in terms of being awarded this grant.